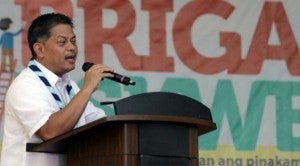 MANILA, Philippines—Indigenous people (IP) from Mindanao have expressed their dismay over

Members of the Save Our Schools (SOS) Network—some 50 “lumad” students and teachers, and Gabriela partylist representative Emmi de Jesus who met with Luistro on Tuesday—lamented the secretary’s response to their petition that he take action against the use of lumad schools and communities as military encampments.

According to SOS Network spokesperson Madella Santiago, Luistro had told them in Filipino during the dialogue: “I will try to relay your concern but I am not sure if they (the Inter-Agency Committee on Children in Armed Conflict or IAC-CA) will listen.”

“We are frustrated with the outcome. Secretary Luistro has only validated his incapability and reluctance in ensuring the protection of schools, students and teachers, especially lumad community schools, from military attacks,” said Santiago.

Members of the SOS Network and IPs camped out at the DepEd central office on Monday night demanding the revocation of a 2013 DepEd memorandum which they claimed allowed the military to conduct activities inside schools and resulted in the harassment of teachers and students in lumad community centers in Surigao del Sur as well as the encampment of Army personnel from the 1003rd Infantry Brigade in Sitio Nasilaban, Barangay Palma Gil, Talaingod in Davao del Norte.

The campout resulted in Tuesday’s dialogue with the education secretary.

According to Santiago, Luistro remained silent on their clamor for the revocation of DepEd Memorandum 221 series of 2013, or the Guidelines on the Protection of Children during Armed Conflict, which provides that the Armed Forces may seek the permission of school officials for the conduct of military activities in learning institutions.

During the dialogue Luistro told the group that it is the Armed Forces and not his agency that should address the issue of military encampments.

But he assured them that he would bring the urgent cases to the attention of the IAC-CA for investigation and immediate resolution.

Santiago insisted that Luistro act on the issue because it was “severely affecting students and teachers” and school operations.

No passing the buck

“As head of the education department, we expected from him (Luistro) his commitment to act on his own capacity and not to pass the resolution of the problem to other government agencies,” she said.

According to Santiago, Luistro should revoke his Dec. 13 memorandum which allows the military to hold activities inside schools, adding that it reflects badly on the department as it would seem an “abandonment of its responsibility in ensuring children’s protection from violence.”

Early last month, the SOS Network asked the military to pull out its troops from its encampment in a Manobo community at Talaingod, Davao del Norte.

The group claimed that members of the 68th infantry battalion of the Army 1003rd brigade continue to overrun the school and the community although their commanding officer had assured school administrators of the Salugpongan Ta’Tanu Igkanugon community learning center that the soldiers would be leaving.

In late October some 1,700 Manobos from Andap Valley in Lianga, Surigao del Sur were displaced by military operations.

A lumad community learning center in Kabulohan, Barangay Buhisan, San Agustin, Surigao del Sur was burned down on Oct. 27, and teachers, students and other members of the community who tried to put the fire out were allegedly threatened and harassed by military troops and civilian militia. Also razed by a blaze was a school building with two classrooms of the Tribal Filipino Program of Surigao del Sur in Sitio Kabalawan.