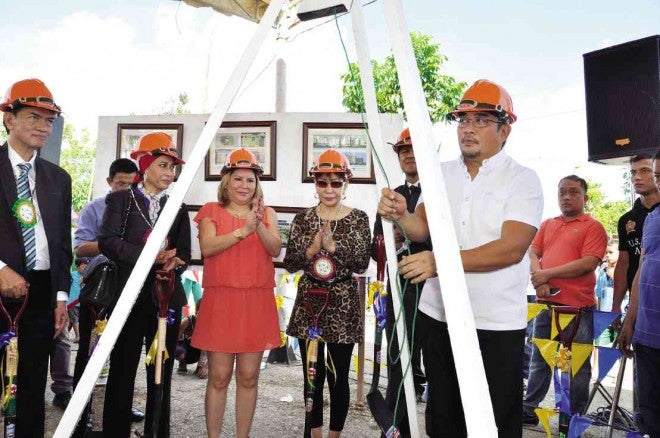 PALAYAN CITY—A P1.5-billion facility, which is expected to open 13,000 jobs, was launched here on Thursday by the Nueva Ecija provincial government and its joint venture partner, a Malaysian subsidiary.

Called Palayan City Business Hub, the facility will rise on a 3-hectare lot in the village of Singalat. It is designed to host national and provincial offices of government line agencies operating in the Cagayan region as well as business process outsourcing (BPO), or call center, offices.

Palayan City Mayor Adrianne Mae Cuevas said the land was donated by the city government as its contribution to the hub, which is being developed by the provincial government and MTD Philippines, a subsidiary of the Malaysian conglomerate Alloy MTD.

Nueva Ecija Governor Aurelio Umali, Cuevas and Alloy MTD officials, led by the firm’s Malaysian chief executive officer, Dato Azmil Khalili, and MTD Philippines president Isaac David, participated in the groundbreaking ceremonies for what had been described as a “milestone” project both for the province and the city.

The business hub, which will serve as the Nueva Ecija Government Center and the city’s Central Business Park, will be composed of four buildings.

Two of the buildings have been reserved for a BPO company. A third building is going to be home to a 75-room hotel. It will reserve two floors for commercial establishments.

Mayor Cuevas said the hotel would complement the existing provincial-government-owned Sierra Madre Suites. “It makes Palayan City [attractive] to both visitors and investors,” she said.

The fourth building will be occupied by national line agencies, which will relocate from the old capitol compound in Cabanatuan City.

Cuevas said the government center would have a state-of-the-art air-conditioning system as well as high-speed Internet service.

The provincial government and its partner will build a central plaza to showcase a specially designed landscape spanning 7,500 square meters of the complex.

The business hub will also feature the first LPG-fueled generators as both standby and base load support for the power requirements of the facilities.

The hub is expected to generate 10,000 call center jobs and 3,000 others to be opened by the hotel and government offices.

Umali said construction would start in January 2015 and would be completed in 15 months or by March 2016.