Woman dies after consuming mussels; 8 others in hospital | Inquirer News

Woman dies after consuming mussels; 8 others in hospital 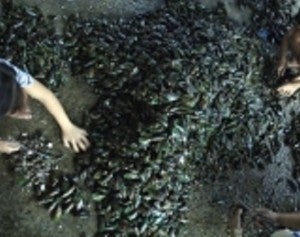 DAGUPAN CITY, Philippines—A woman died while eight other residents of Bolinao town in Pangasinan province were treated at a hospital on Wednesday (Dec. 3) and Thursday (Dec. 4), after consuming mussels.

Dr. Jeremy Rosario, assistant provincial health officer, said Manilyn Conde, 20, of Barangay (village) Ilog Malino, died on Wednesday afternoon as she and four others were being taken to the Bolinao Community Hospital.

“There was a reported food poisoning [case] late Wednesday afternoon in Bolinao. One of the five patients taken to the Bolinao Community Hospital was already dead upon arrival at the hospital. The rest were treated and were eventually transferred to the Western Pangasinan District Hospital in Alaminos City,” said Rosario in a news briefing here.

Revenge of the ‘pawikan’: 5 dead after eating sea turtle meat