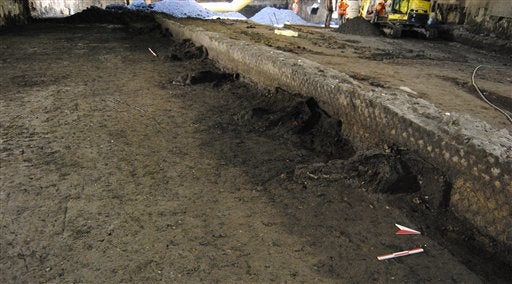 In this undated photo provided by the Cooperativa Archeologia, roots and trunks lie next to the base of a wall, part of the notable finds that were discovered during a subway construction in Rome. AP

ROME — Archaeologists have unearthed an ancient commercial farm in the heart of modern Rome, taking advantage of subway construction to explore deeply in urban settings.

They worked some 20 meters down (some six stories deep) near St. John in Lateran Basilica. Today’s Rome rests upon medieval layers and, under those, more ancient strata of life.

Rossella Rea, the dig’s leader and a culture ministry official, said Wednesday that archaeologists discovered a first-century agricultural business, the closest to Rome’s ancient center ever found, an irrigation basin measuring 35 by 70 meters (115 feet by 230 feet), and an extensive drainage system near the ancient Aqua Crabra water source.

Notable finds included a three-pronged iron pitchfork, storage baskets, leather fragments possibly from a farmhand’s glove or shoe, and traces carved into stone by a waterwheel’s repeated turning. Also extraordinary are well-preserved vestiges of willow and other tree roots and stumps.

Peach pits, presumably from the farm’s orchard, also were found. Peaches were still a novelty, first imported from the Middle East.

“They were almost luxury items,” Rea told The Associated Press at the American Academy in Rome, where a conference discussed the findings.

Ancient Romans recycled. Amphorae, the jars they favored to transport and store food, were lined up with their ends cut open to double as water conduits.

Other older signs of life were carriage ruts from as long ago as the 6th century B.C.

Rea said some discoveries will eventually be integrated into the St. John’s subway station so the public can see then, while other artifacts will go on display in Rome museums.

Visitors will have a long wait for that subway station. Metro C line construction is running years behind schedule.