MANILA, Philippines—Seasoned journalists from all over the country lent their expertise during the 16th annual Inkblots at the Thomas Aquinas Research Complex inside the University of Santo Tomas main campus in Manila.

Inkblots is a National Campus Journalism Fellowship hosted by The Varsitarian, the official student publication of the UST. It was held from December 1 to 3.

The three-day event consisted of several seminars featuring the leading journalists in the country, where they shared their expertise with aspiring journalists.

“Life in media is very difficult and very competitive,” said Enriquez, adding that the world today is fast, furious, intense and full of challenges. 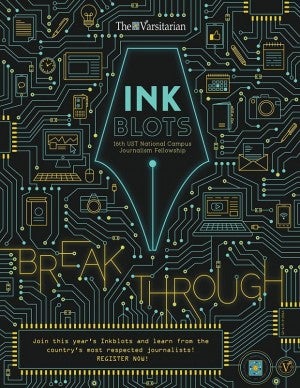 Despite these changes, the veteran broadcast journalists conceded that the old problems hounding the media remain.

“There are (still) many opportunities to do bad and to do good,” Enriquez told the students, adding, “You can do good and still do good business.”

Nery engaged the journalism students in an interactive manner, demonstrating live how news stories from reporters get published on INQUIRER.net while inviting questions from the students throughout the presentation.

Using an article about a recent eSports tournament won by overseas Filipinos, Nery showed the step by step process how an article makes its way to the news website, explaining tagging and other steps unique to online publishing.

“The moment you click ‘publish’, it’s out there,” Nery said.

When asked about how the comment section is being moderated and how to deal with online criticisms, he answered, “There are no two ways around it, we journalists just have to develop a thick skin. It’s(Online journalism) like the Wild West.”

Felipe Salvosa II refreshed the students’ memory on the basic tenets of news writing. He discussed in length the inverted pyramid, the “Who, What, When, Where, Why and How” as well as dealing with sources and the rules of attribution.

Salvosa, who previously served as editor for BusinessWorld, is now working as Philippine researcher for the Financial Times.

Befitting of its status as the only Pontifical University in the Philippines, the next Inkblots seminar consisted of three panel speakers discussing Catholic journalism as a means to evangelize and espouse Christian values.

The panel was composed of Joey Villarama, a radio producer for TV5, Fr. Nick Lalog, a former radio-television reporter, and Atty. Jose Sison, who lent his legal expertise to the panel.

All three addressed the students’ questions on the multiple issues confronting Catholic journalism.

Arguably the most anticipated speaker of the day was celebrated sports journalist Quinito “The Dean” Henson.

Henson talked about the importance of sports journalism in the Philippine context.

“We need vibrant sports journalism in campuses,” Henson told the students. “Sports is pervasive throughout the country.”

He added that sports news carried a lot of impact on the Filipino public.

As an exercise, Henson invited coach Leo Austria and center June Mar Fajardo to the stage as participants in a mock press conference, where the students put forward their questions as if it were an actual post/pre-game interview.

To further motivate the students, Henson offered various sports memorabilia to the winner of the best sports article written on the mock press conference, which included a basketball signed by the San Miguel Beermen, a cap bearing boxer Manny Pacquiao’s autograph and a towel signed by Brooklyn Nets point guard Deron Williams.

The students asked the panelists some very pointed questions, prompting interesting soundbites such as:

He also playfully quipped that he was thankful that punches are illegal in the PBA.

Following the mock press conference, Quinito Henson lived up to his moniker as “The Dean,” as he pored through the students’ entries for the winner of the sports writing competition.