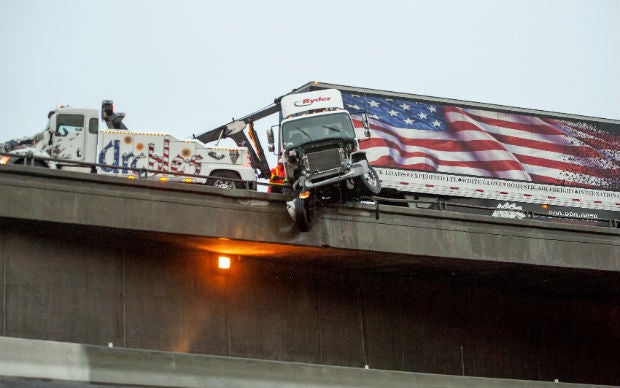 The cab of a jackknifed tractor-trailer hangs over the eastbound section of Freeway 91 at its intersection with Freeway 55 in Anaheim Hills, Calif. on Tuesday, Dec. 2, 2014 after it collided into the guardrail according to the California Highway Patrol. Slick road conditions from heavy rains may have played a role in the accident that occurred around 3 p.m., CHP Officer John Latosquin said. AP

After a scorching drought which is the worst in California since records began, a powerful storm front lashed the region from the southern border with Mexico to the northern boundary with Oregon.

A large truck was left dangling over a highway overpass in one accident while the celebrity enclave of Malibu was left isolated after rains knocked over power lines and forced the closure of roads leading to the coastal town.

Up to four inches (10.16 cm) of rain was expected to be dumped across parts of the region, with hillside communities feared to be most at risk of mudslides after years of drought which have stripped slopes of stabilizing vegetation.

In the Los Angeles suburb of Glendora and communities of Camarillo and Silverado Canyon, more than 120 people were evacuated over fears of mudslides.

“With the rain, it’s just moving it down the hill where nature wants to take it,” Camarillo Springs resident Barbara Williams told KTLA 5 local television.

“Unfortunately, we have some homes in the way of where nature wants to go.”

Local television showed residents frantically laying sandbags around properties in an effort to protect homes in the event of mudslides.

Los Angeles County Fire Department deputy chief Steve Martin warned residents in hillside communities not to risk staying in their homes if required to evacuate. “We know it’s an inconvenience, we know it’s hard to leave your homes behind, but the fact of the matter is if the mountains does cut loose, it happens so fast you’re already behind,” The Los Angeles Times quoted him as saying.

Several neighborhoods in Los Angeles were given a record soaking, with the 1.15 inches (2.9 cm) dumped on the city’s downtown surpassing the old mark of 1.10 (2.79) set on December 2 1961, according to the National Weather Service.

More heavy rain is expected across the region on Wednesday before the storm eases towards the weekend.

California is in the grip of the worst drought recorded in its history, dramatically shrinking lakes and reservoirs and prompting many regions to introduce stringent water use restrictions.

Sea rise will bring floods to parts of Silicon Valley