Drilon accuser returns with records to prove ‘overpricing’ of ICC

After admitting he initially based claims on Wikipedia
By: Maila Ager - Reporter / @MAgerINQ
INQUIRER.net / 12:35 PM December 03, 2014 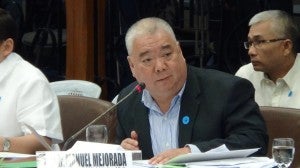 MANILA, Philippines–Former provincial administrator Manuel Mejorada came back to the Senate on Wednesday, this time, carrying documents that he said would prove that the Iloilo Convention Center (ICC) was overpriced.

Mejorada first appeared and testified before the Senate Blue Ribbon committee last November 13, 2014 where he admitted that he had no evidence to prove his allegation of overpricing on the ICC, a pet project of Senate President Franklin Drilon.

But he came back and submitted to the committee a 16—page memorandum and a copy of a deed of donation that he said would show that the cost of the project was pegged at only P200 million.

“With the indulgence of this august body, I wish to establish that the Iloilo Convention Center project is fraught with irregularities and outright violations of law from its inception,” Mejorada said in the memorandum.

“The principal characters in this transaction willfully disregarded, and violated, the law in the pursuit of this project in the guise of promoting tourism and economic development.

“The transgressions of the law began with its inception, continued into the funding, procurement and implementation. And there is now a high-level conspiracy to cover-up the misfeasance and malfeasance that have transpired,” he further said.

Mejorada said the deed of donation between Megaworld Corporation and the Department of Tourism (DOT) to build the ICC is the “best  evidence of  overpricing.”

Mejorada said that in accepting the donation, the donee accepted the deed of donation which specifically cited that the construction of the project would only cost P200 million.

The memorandum then quoted parts of the deed of donation which state that “The DONEE accepts this DONATON and in so accepting, binds itself to:

“a. Earmark, raise, and/or appropriate through the Tourism Infrastructure and Enterprise Zone Authority (TIEZA) and/or available government funding, and in accordance with applicable Philippine laws, Two Hundred Million Pesos (P200,000,000.00) for the construction and development of the Iloilo Convention Center within two (2) years from the time this Deed takes effect, to be released and paid, as follows:

“(i) Philippine Pesos Fifty Million (Php50,000,000.00) upon execution of this Deed of Donation or within a reasonable time thereafter; and

The memorandum noted that there was nothing in the contract that would suggest that the P200 million was “merely a seed fund to kick start the construction of the project.”

“The contract itself set the budget for the construction of the Iloilo Convention Center, i.e. P200 million, with a schedule for the release of tranches of P50 million to ensure the smooth implementation of the project,” it said.

“Hence, any amount in excess of the P200 million constituted an OVERPRICE especially because it is based on Megaworld Corporation’s own proposed conceptual design.

“Not only does any amount of public funds in excess of P200 million an OVERPRICE, but the disbursement constitutes malversation of public funds as it was made without legal basis,” it further said.

Mejorada furnished reporters a copy of the deed of donation, which he said he only obtained from the Register of Deeds of Iloilo City last December 1.

He said those responsible for raising the cost of the ICC over and above the original budget of P200 million must explain their actions before the committee.