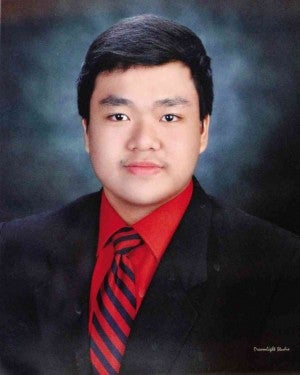 MANILA, Philippines—The Department of Justice (DOJ) has ordered the filing of charges against 14 suspects, mostly members of the Tau Gamma Phi (TGP) fraternity, in the fatal hazing of Guillo Servando, the culinary arts student from De La Salle University-College of St. Benilde who succumbed to his injuries after hours of severe beatings on June 28.

In a resolution, a panel of DOJ prosecutors composed of Arnold Magpantay, Alejandro Daguiso and Stewart Allan Mariano found probable cause to charge the suspects with violation of Republic Act No. 8049 or the antihazing law.

The panel relied on the positive identification of the suspects by Servando’s fellow TGP neophytes, namely John Paul Raval, Lorenze Anthony Agustin and Levin Roland Flores, who survived the ordeal at the hands of their “brothers” in a house in Makati City. Servando later passed out at a condo unit in Manila where he and the other neophytes were taken after the rites.

“[T]heir vivid recollection of what really transpired on June 28, which…were not rebutted by the respondents, more than swayed our minds to morally conclude that they were telling the truth and that their testimonies were credible, true and straightforward,” they said.

The Servando family welcomed the ruling. “We are thankful to the Justice secretary (Leila de Lima), the prosecutor general and the prosecution panel for coming out with the resolution. Hopefully, we will see arrests soon,” said Guillo’s father Aurelio, the private complainant in the case.

According to the Bureau of Immigration, Navoa, Pablico, Tatlonghari, Calupas and Valbuena have already left the country.

Pajarito, the caretaker of the Makati residence where the initiation rites were held, was provisionally admitted earlier into the DOJ’s witness protection program. He was exonerated after the witnesses did not contradict his claim that he had nothing to do with the hazing.

Arevalo, Loresca, Penano, Dayanghirang and Valbuena were also cleared after it was established they merely passed by and stayed briefly at the place and did not participate in the actual hazing.

As to Almazan, who claimed that he only participated in the initiation rites because he was threatened by Morales, the DOJ panel said this defense remained uncorroborated and must still be threshed out in a full-blown trial.

The prosecutors said they applied Section 4 of RA 8049 which states: “If the person subjected to hazing or other forms of initiation rites suffers any physical injury or dies as a result thereof, the officers and members of the fraternity, sorority or organization who actually participated in the infliction of physical harm shall be liable as principals.”

“In simple terms, what the law states is that a fraternity member or one who is present in the hazing rites, whether he is a member or not, cannot at all be charged if he has not actually inflicted any physical harm on an erstwhile applicant (neophyte),” they said.

On the late afternoon of June 28, Servando and the other neophytes were brought to a house at the corner of Calatagan and Hilario streets in Barangay Palanan, Makati, for their initiation. The fraternity members then took turns punching them and beating them with wooden paddles, according to the complaint.

The neophytes were later brought to Raval’s condo unit around 9:30 p.m. When Servando collapsed, Raval called for help via the police emergency hotline 117.

Servando and the others were brought to Ospital ng Maynila and later to the Philippine General Hospital. A medical report later revealed that Servando died due to traumatic injuries in the torso and lower extremities.

The charged suspects could face life imprisonment if found guilty.

The antihazing law also states that school authorities or faculty members who consented to or knew about the hazing, as well as officers or alumni of fraternities who planned the hazing but not necessarily present at the rites, may be punished as principals or accomplices.

In Servando’s case, however, the prosecutors said there was no evidence that St. Benilde authorities or higher Tau Gamma Phi officers knew about June 28 hazing.

Read Next
Vice Mayor Moreno irked: We got flak for truck ban; now MMDA wants it back
EDITORS' PICK
Look Through: The fate of impounded stray dogs
House energy committee chair Arroyo bats for cheap electricity
What to watch out for when selecting a video surveillance solution
23,000 cops to be deployed nationwide for school reopening
Unleash the photographer in you this World Photography Day with vivo smartphones
DOH says COVID-19 cases plateauing, but public shouldn’t be ‘complacent’
MOST READ
Sharon Cuneta asks for prayers for friend in ICU who suffered silent stroke
Light therapy could be the answer to your sleep problems
Korina Sanchez reunites with former ABS-CBN co-anchors Julius Babao, Cheryl Cosim
PBA: San Miguel ousts Meralco to arrange finals duel vs TNT
Don't miss out on the latest news and information.