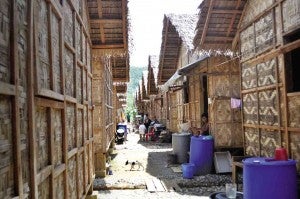 THE SO-CALLED transitional houses for survivors of Supertyphoon “Yolanda” are made of nipa and bamboo. While beneficiaries say these are better than leaky tents, the place where these were built is far
from where they earn a living. CONTRIBUTED PHOTOS

MANILA, Philippines—At least P9.5 billion of the proposed P22.5-billion supplemental budget for 2015 is earmarked for the emergency shelter assistance and housing construction of victims of Supertyphoon “Yolanda.”

According to House Bill No. 5237, P7.9 billion were allotted for the construction of permanent housing under the National Housing Authority (NHA) for the victims of Yolanda (international name: Haiyan), the world’s strongest typhoon to hit land that claimed over 6,000 lives.

At least P1.5 billion was also earmarked for the emergency shelter assistance for Yolanda survivors.

The next biggest allotment is P2.8 billion for the operational transformation plan of the Philippine National Police, under the Department of Interior and Local Government (DILG).

This is followed by the P1.9-billion allotment for the upgrading of the National Household Targeting System for Poverty Reduction of the Department of Social Welfare and Development, and P1.8 billion for the obligations arising from implemented infrastructure projects under the Department of Public Works and Highways.

The NHA handled by Vice President Jejomar Binay and the DILG under Interior Secretary Mar Roxas received the larger portions of the budget. Binay and Roxas are expected to compete in the 2016 presidential race.

The Department of Budget and Management  initially asked the House of Representatives for P23.34 billion in supplemental budget but this was slashed to P22 billion after P1.3 billion in additional funds for the hosting of the Asia Pacific Economic Cooperation (Apec) Summit was taken out.

The supplemental budget will also fund projects that were stalled after the Supreme Court struck down the Priority Development Assistance Fund (PDAF) and some practices under the Disbursement Acceleration Program (DAP), according to Speaker Feliciano Belmonte Jr.

Belmonte said he expected the supplemental budget to be passed before the House adjourns for Christmas break on December 19.

The rest of the supplemental budget is broken down as follows: