ZAMBOANGA CITY, Philippines – Several detained suspects in the Sept. 9, 2013 Zamboanga Siege have claimed they were tortured by members of the government security forces.

The details of torture were included in the 63-page resolution of the Department of Justice’s reinvestigation report in connection with the rebellion and insurrection charges filed against those arrested.

The DOJ earlier recommended the dropping of cases against 60 of the 287 charged due to absence of gunpowder nitrate and testimonial evidence.

The victims alleged that their heads were wrapped in plastic bags, their feet hit by a baseball bat and their genitals and nipples stapled. 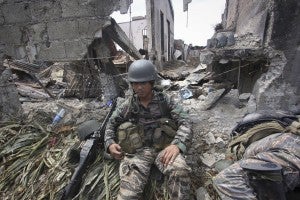 A Government trooper rests amidst the ruins at the site of a three-week intense fighting between Government forces and Muslim rebels who have taken nearly 200 people hostages and used them as human shields, Saturday Sept. 28, 2013 in Zamboanga city, southern Philippines. AP FILE PHOTO

The victims said they were tortured to force them to admit that they were members of the Moro National Liberation Front (MNLF). (Members of an armed MNLF faction staged a protest action in Zamboanga City with the intent, according to the government, to take over the city government facilities and declare their return to rebellion. Government immediately sent troops to arrest the armed MNLF members, resulting in the siege.)

The three left their homes after government announced a forced evacuation on Sept. 14. With white cloth on sticks to signify they were civilians, they ran toward government soldiers’ location.

“However when they were within reach, soldiers hit them with the butts of their rifles, made to lie flat on the ground and their hands and necks tied with a rope,” the DOJ’s report, a copy of which was obtained by the Philippine Daily Inquirer, said.

During the interrogation, the report added, the three were “subjected to torture, questioning, forcing them to admit that they are members of the MNLF. They were repeatedly punched, kicked and their heads wrapped with plastic bags.”

“After hours of torture they were transported to Camp Batalla for another round of interrogation and later brought to Zamboanga City Police Office (ZCPO),” the report added.

“(At the ZCPO), police punched staple wires on their nipples, their feet bound together and their faces covered with plastic bags and their penises punched with staple wires,” the report said.

Umandak is a homeowner at the Ayer Village in Santa Barbara. His neighbor, Manambahi, is a utility worker of the Santa Barbara Elementary School, while Mahamud is a pedicab driver.

Lawyer Edylyn Santiago, head of the sub-regional Office of the ARMM’s Human Rights Commission, said that of the 60 whose cases were recommended for dismissal, 29 were from Basilan, eight from Sulu, 14 from Zamboanga City, two from Zamboanga del Norte and six from Zamboanga Sibugay.

Of those from Basilan, most are from Barangay Sulutan Matangal in Mohammad Ajul town.

“Most of them are poor fishermen and boat people who were just contracted by the MNLF to bring them to Zamboanga City,” he said.

He said more than 10 fishermen from his town were killed during the siege, while more than two dozens have been in jail since the siege.

But Commissioner Edilwasif Baddiri of the National Commission on Muslim Filipinos (NCMF) said freeing the suspects would go through a long process.

“It will go through the court process and the court will ask the other parties to comment and the judge will make his own assessment on an individual basis, so it will still take a long time,” Baddiri told the Philippine Daily Inquirer in an interview.

“Nothing has been communicated to us,” Salazar said, adding that she might “make a letter of appeal.”

Salazar maintained that those arrested passed through a “process of screening” to ensure that innocent civilians were not deprived of their liberty.

Supt. Ariel Huesca, spokesperson of the Zamboanga City Police Office, said all material evidence gathered against the 287 accused, including more than a hundred firearms, were diligently collected by the police.

He, however, admitted that not all the firearms found and recovered from the sites of battle were in possession of those arrested.