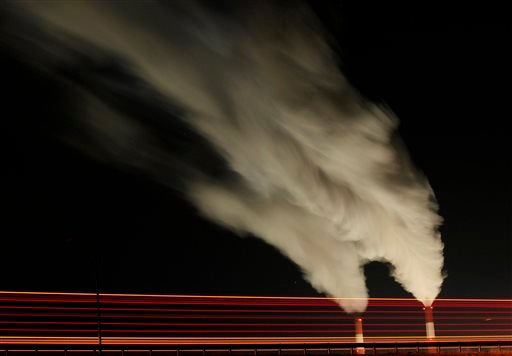 FILE – In this Jan. 19, 2012 file photo, smoke rises in this time exposure image from the stacks of the La Cygne Generating Station coal-fired power plant in La Cygne, Kan. Carbon dioxide pollution has increased steadily, by 60 percent, from 1992 to 2013. AP PHOTO

WASHINGTON – In the more than two decades since world leaders first got together to try to solve global warming, life on Earth has changed in stark ways.

Carbon dioxide emissions are up 60 percent. Global temperature is up six-tenths of a degree. Population is up 1.7 billion people. Sea level is up 3 inches. Extreme weather in the United States is up 30 percent. Ice sheets in Greenland and Antarctica are down 4.9 trillion tons of ice.

Diplomats began talks Monday at a United Nations global warming conference in Lima, Peru, to pave the way for an international treaty they hope to forge next year.

To see how much the globe has changed since the first such international conference in 1992, The Associated Press scoured databases from around the world.