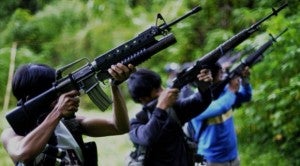 Donning white overalls, at least 20 New People’s Army (NPA) guerrillas sneaked past security by posing as fungicide applicators of Sumitomo Fruits Philippines (Sumifru) in the village of San Roque at about 4 a.m.

They took the shotgun and two handheld radios of guard Darwin Sajulga, while others went to the airstrip, where the bunkhouse of the Philippine Army’s 60th Infantry Battalion augmentation force was located.

“At gunpoint, the rebels abducted Cpl. Benjamin Samano and Pfc. Mark Ricarte and seized their firearms and ammunition,” Estay said in a text message.

The rebels commandeered one of the company’s Isuzu Elf trucks and fled to the hinterlands, Estay added.

“They shouted ‘Mabuhay ang NPA (Long live the NPA)!’ before escaping,” he said.

Lt. Vergel Lacambra, public information officer of the Army’s 10th Infantry Division, said the raid that lasted about five minutes was believed to have been carried out by the NPA’s Front 33.

“We condemn this latest criminal act by the NPA. Our troops are now conducting pursuit operations to locate and rescue the soldiers,” Lacambra told The INQUIRER by mobile phone.

Civilian hurt by stray bullet during NPA attack in Albay