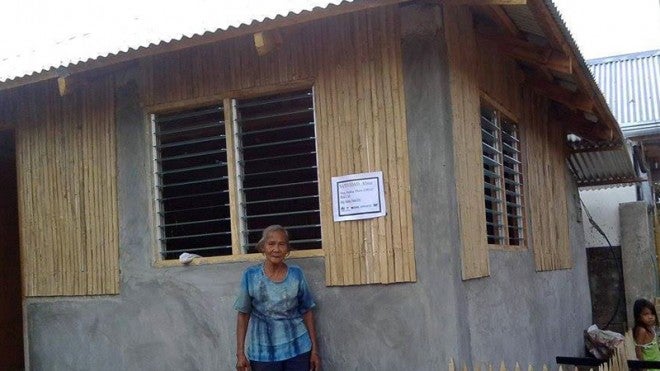 HOME IS WHERE HEART IS Marina Natividad in front of her new house, which UN Habitat helped build in Roxas City. The house, which has a four-sided roof and walls of concrete hollow blocks, can withstand powerful winds. PHOTO COURTESY OF UN HABITAT

ROXAS CITY, Philippines—Marina Natividad, 69, clutched a handful of flickering candles as she haltingly stepped inside her new home a year after Super Typhoon “Yolanda” pummeled this serene western Visayan outpost, toppling an ironwood electric post that crashed into her shanty.

It’s on the same corner lot in Barangay (village) Baybay, where her old house stood. But it’s no longer made of patched-up scraps that housed her family for 18 years.

The lower walls, made of hollow blocks, segue to upper walls made of split bamboo nudged into a tight fit, slat intertwined into the next slat in a neat back-to-back manner and clinched by sturdy wooden frames. These walls, a salute to the wisdom of vernacular architecture that allows passive cooling, give way to clear, glass jalousie windows for natural lighting and ventilation.

The unique visual signature of the house, however, is the four-sided roof known as “quatro aguas,” designed to withstand strong winds, such as those ushered in by Yolanda (international name: Haiyan).

Nanay Marina’s new house, designed as “the new normal” in our disaster-prone archipelago in these times of climate change, has provisions for electricity, plumbing and sanitation systems for kitchen and toilet facilities, with allowances for future expansions.

“Now we can go on with our lives,” said Nanay Marina. “Our heartfelt thanks to all those who made this possible.”

But the accolade goes first and foremost to Nanay Marina and her family, for they were crucial in making all this possible.

“Her daughter, Diosa, was so caught up in the construction work that she would sometimes forget to prepare lunch, and it would only be late in the afternoon when she would take out her fishing boat with her hungry 7-year-old son to catch the fish they needed to cook for the family that day,” said Warren Ubongen, disaster risk reduction and shelter specialist of UN Habitat.

The group is spearheading this pioneering community-driven approach to recovery and rehabilitation in the Post-Yolanda Support for Safer Homes and Settlement project.

Ubongen pointed out that Nanay Marina’s daughter, Alma, got the land by paying about P400 a month over the years through their neighborhood home owners’ association (HOA). The association is enrolled in the Community Mortgage Program of Social Housing Finance Corp. (SHFC), a government corporation that helps communities acquire land through shared community ownership and responsibility.

The humanitarian frenzy to put roofs over the heads of Yolanda victims has resulted in the construction of temporary shelters, at best, because permanent shelters are bedeviled by land issues.

The current practice is that the national government forks out money for the construction of houses but burdens the local government units with providing the land on which to build the houses.

As a result, many victims of past storms, including Tropical Storm “Ondoy,” still stay in temporary shelters.

Official estimates peg at 1.1 million the number of houses destroyed or damaged by Yolanda.

The national government is committed to build 205,000 houses in the Yolanda corridor, which includes more than 100 cities and municipalities on several islands, such as Palawan, Mindoro, Panay, Cebu, Leyte and Samar.

“There is a concurrence among decision-makers in the shelter sector to provide at least 100,000 houses or permanent shelters in the wake of Yolanda,” said Christopher E. Rollo, country program manager for the Philippine office of UN Habitat.

“But based on the historical housing production output, this is indeed a challenge. Does this mean that the Yolanda housing backlog will take years to address? And to think that we have to consider other disasters to come our way since the country is hit by an average of 20 typhoons a year,” Rollo said.

He and his team at UN Habitat are showing the way to go about this conundrum.

They partnered with the SHFC to ensure that housing beneficiaries—the term they use is “home partners”—would own their land to begin with, forestalling any land issues that would hamper the construction of houses.

“As it turned out, Roxas City and nearby outlying areas have the most number of SHFC Community Mortgage Program projects in the country,” said Robert Deutsch, project manager of UN Habitat’s Roxas City office.

His staff is currently working with 24 communities in the area.

“The HOAs in the communities own the project. They determine who among their members are eligible for housing grants. The eight criteria of eligibility ensure that the selected home partners were indeed rendered homeless by Yolanda and do not have the resources to build new houses,” he said.

After determining eligibility, the community receives the housing grants through the HOAs, which are enabled to handle the finance, purchasing, construction and audit.

“The community HOAs were at first amazed at the amount of money in their bank account, but then they proceeded with transparency and accountability,” Deutsch said.

“This community-driven approach is at the heart of this project. We have done this in other countries, notably in Indonesia, the Maldives and Sri Lanka after the 2004 Indian Ocean tsunami. We call it the People’s Process,” Rollo said.

“Since the grant is given directly to the community, the houses are 30 percent cheaper because there are no contractors’ or middlemen’s fees. Then the project injects cash into the local economy. Since the community is building their own homes, construction is faster and there is no cutting of corners in terms of quality,” he said.

“Moreover, the community people are trained and become employable, opening doors for income opportunities not just for this project but for other projects. In fact, some of the people we trained are sought after in their neighborhood because they have been trained the UN Habitat way of good quality housing construction,” he said.

The housing project, funded with $2.5 million from the Japanese government and cofunding from the Department of Social Welfare and Development, covers the following:

— Construction of 610 houses by the locally trained artisans

— Conduct of community training on self-assessed house improvement for 4,000 households

On the day Nanay Marina settled into her new home, Capiz Gov. Victor Arancillo joined UN Habitat in turning over housing units to other home partners.

During the official ceremony, Arancillo said: “I had never seen so much destruction in my life. For three hours, Yolanda felt like it was the end of the world. I thought that we were being punished by God. But now, having seen the outpouring of support after the devastation, I realize that God was not closing doors on us. He was actually opening windows of opportunity.”

“In a sense, we can say that [the situation of some people] is far, far better than it was before the typhoon. Now, some of you have new houses that are sturdier than what you had. Take good care of your new homes,” he said.

Nanay Marina danced with glee at her new home in Barangay Baybay, pausing for a while to say a prayer before the statues of the Santo Niño and the Crucified Christ on her altar, which also showcases photographs of her triumph in her younger days.

Home, indeed, is where the heart is. Mozart Pastrano/Inquirer Mindanao

Read Next
‘Beneficiaries’ laud Malampaya Fund inquiry
EDITORS' PICK
Biden vows to stand with Asia on freedom, hits at China on Taiwan
Work-From-Home is here to stay and requires reliable logistics
NCR’s COVID-9 alert level may be downgraded from 3 to 2 soon — DOH
Legarda emphasizes role of ICC/IPs in nation building this IP month
FDA reviewing COVID-19 vaccines’ EUA for booster shots
Climate Change Commission and Nestlé PH to discover sustainability-focused solutions
MOST READ
Drivers now required to take driver’s education upon license renewal – LTO
Can Marcos Jr. be disqualified?
Marcos Jr’s ‘special diploma’ from Oxford: You can have it, too
Gordon to Duterte: You? Teaching me courtesy?
Don't miss out on the latest news and information.