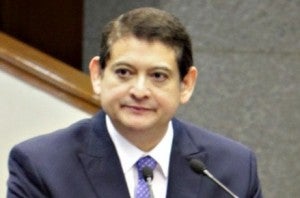 MANILA, Philippines — Janet Lim Napoles allegedly had links to 12 non-government organizations that cornered P900 million in Malampaya funds released to the Department of Agrarian Reform in 2009 to help typhoon victims, and she and former officials of the agency will be asked about their alleged roles in the transaction before the Senate Blue Ribbon Committee.

The committee intends to invite Napoles, her former employee Benhur Luy, Ruby Tuason, former DAR Secretary Nasser Pangandaman, Undersecretary Rafael Nieto, among others, to subsequent hearings intended to delve deeper into the Commission on Audit’s 2013 findings on the DAR’s use of Malampaya funds, according to its chair, Sen. Teofisto Guingona III.

“We will be inviting everyone that has been involved. I just don’t want to enumerate the order,” Guingona told reporters.

He also said he was more inclined to invite the former DAR officials first, and then Napoles in another hearing, to ensure the proceedings would be orderly.

The DAR was just one of the agencies that had received part of the government’s share from the Malampaya gas project, and the COA is in the process of auditing how other executive agencies used Malampaya funds released to them.

The Malampaya fund came from the government’s 60 percent share from the Camago-Malampaya reservoir, a natural gas project in Palawan. From January 1, 2002 to June 30, 2013, P173.28 billion has been collected, and total releases amounted to P38.83 billion.

Appearing in the Senate inquiry on Monday, COA chair Grace Pulido Tan detailed the agency’s 2013 findings on the P900 million funds given to the DAR, which were intended for programs to assist agrarian reform beneficiaries devastated by typhoons Ondoy and Pepeng, but which turned out to be “ghost projects.”

Tan noted that majority of the 97 mayors who supposedly requested the DAR for the funds for projects to help their constituents denied taking part in the transaction, and none of the mayors said they knew of any project for their constituents.

“It seems there was no project. Sixty-seven of the mayors denied their signatures and knowledge … They knew of no assistance or project supposedly benefiting farmer beneficiaries affected by Ondoy and Pepeng. None of the listed beneficiaries we chose for validation confirmed any project,” she said.

The DAR had released the funds to only 12 NGOs that were supposedly endorsed to implement the projects.

Tan said these groups had been linked to Napoles, not in the COA report on the Malampaya fund, but in another Senate hearing on the pork barrel scam, where Luy, Napoles’ former employee, testified on the alleged scheme to divert public funds to private pockets.

Tan said she was not saying Napoles owned the NGOs, just that she had been linked to them.

The 12 Malampaya NGOs were different from the groups that Napoles allegedly used in the pork barrel scam, she said.

The Malampaya NGOs were:

The NGOs had signed 97 memoranda of agreement with the DAR purportedly to implement the Malampaya-funded projects. These MOAs were signed by only three notaries public, and only four accountants came up with the NGOs’ independent audit reports, Tan noted.

The COA also found that the DAR has requested funding for the projects for beneficiaries even before it received letter requests for assistance coming from local government units.

She also said the DAR had not validated the letter-requests before seeking funds from the Department of Budget and Management.

The DAR also signed MOAs with the NGOs even before the DBM had issued a special allotment release order, or a notice that funds would be made available for the requested projects.

It was then Undersecretary Nieto who authorized the release of the funds to the NGOs, said Tan, but he had told the COA that Secretary Pangandaman provided to him the basis of the P900-million fund request to the DBM.

Nieto had said that at that time, Pangandaman was set to leave for a trip overseas, but before he departed, he told Nieto that there would be P900 million released to the DAR and intended for agrarian reform beneficiaries affected by Ondoy and Pepeng.