For this YA novelist, writing is like playing God | Inquirer News
Close
menu
search

For this YA novelist, writing is like playing God 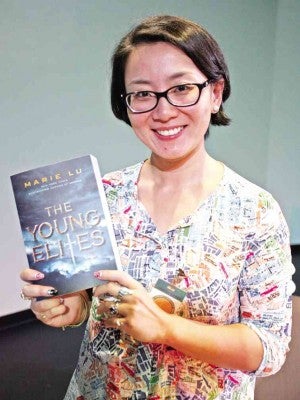 LU SAYS all her books are based mainly on real events. Kimberly Dela Cruz

When she was 13, Marie Lu read that a girl her age had gotten her book published.

“That was the day I figured out people wrote books. In my head, I thought books were just spat out of factories somewhere,” Lu admitted to her audience of students on a recent visit to International School Manila (ISM).

“When I read that on paper, I thought, ‘Oh, real people write books,’” Lu said. The young woman, Amelia Atwater-Rhodes, who wrote “In the Forests of the Night,” was her inspiration for writing her first book.

Lu is now one of The New York Times’ best-selling authors and has successfully published four books, including a dystopian trilogy, the “Legend” series (“Legend,” “Prodigy” and “Champion”), and the recently released fantasy novel, “The Young Elites.”

She told her young audience that before she achieved her current stature, she had a few setbacks.

The 30-year-old writer said she was rejected by hundreds of agents. “When you get rejected 600 times in life, it doesn’t bother you that much anymore,” she said.

Lu, who was born Xiwei Lu in China in 1984, said her experience as a witness to the 1989 Tiananmen Square protest somehow became part of her writing. She was only 5 years old then.

“When my aunt brought me to the Tiananmen park, I thought it was some kind of a tourist attraction because there were tanks there,” she said.

A few days after that visit, Lu said she knew something serious had happened because classes were canceled. It was also the day her family migrated to the United States.

Even though she had left her homeland, Lu said she still made it a point to instill parts of it in her stories by giving her characters multicultural features.

“What I like and dislike about writing stories is that you get to play God … But it’s difficult to be God because you have to make sure the pieces [of your story] make sense and the elements fit,” the young novelist said.

In all her books, Lu said, especially the “Legend” trilogy, nothing was made up. Although the events did not happen in real life, they were based mainly on real events. Lu said that before she wrote her stories, she read “real-life dystopian events” first.

“There is no utopian country and that is the way the world is,” she said. Lu said some materials in her work were based on life in North Korea and on the Holocaust.

Asked why she chose to write dystopian novels, she said, “Because you get to see this warped, twisted part of life … and I find dark things fascinating.”

Lu also said that unlike many writers who stay up late to get their creative juices flowing, she likes to get her job done in the morning.

“I’m a morning person. That has been proven because everything I write in the afternoon is a total mess,” she said. She prefers working at home, she said, although she avoids listening to music with lyrics because “anything with words confuses me.”

Before becoming a writer, Lu was an art director in the video game industry. She said she still enjoyed sketching and drawing, and some of her works are sketches of her books’ characters.

“I try to draw them and, like an art production for a movie, they become fluid … They change as the character changes,” she said.

Speaking of movies, a film adaptation of her book “Legend” will be released soon. Lu said CBS Films and the producers of “The Fault in Our Stars” and “The Maze Runner” were now working on the adaptation.

As for the actors to be cast, Lu hopes that for the male protagonist of “Legend,” the movie producers would find an Asian version of Leonardo DiCaprio at the age when he played the lead in “Titanic,” the blockbuster disaster movie. “Elle Fanning would be perfect for the female protagonist, June,” she said.

Lu, who is married to a Filipino, said she enjoyed her stay in the Philippines. She had gone diving in Cebu province and was spending her last day in Manila.

“Never in my wildest dream [did I think] I would be here in the Philippines and now, I am talking right in front of you,” she told her ISM audience. “And it’s so surreal.”

Marie Lu’s “Legend” trilogy and “The Young Elites” are available in all National Book Store and Power Books branches.