Palace to ER Ejercito: Aquino not going to jail 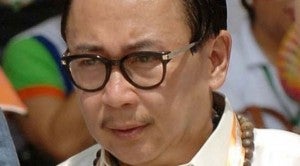 (On the part of the President and the members of Cabinet, we serve the country in accordance with the public’s trust and the Constitution and other laws of the land.)

Ejercito, in an earlier interview, accused the Aquinos of harassing his family.

He blamed the late President Corazon Aquino for the unseating of Joseph Estrada as San Juan mayor in 1986 and called his own ouster “selective justice.”

Ejercito said he is waiting for 2016, when Aquino steps down.

Coloma, on the other hand, insisted that the President’s family had nothing to do with Ejercito’s disqualification because of an election violation.

(The Supreme Court itself upheld the decision of the Commission on Elections, which is an independent constitutional body.)
He said the administration has nothing to fear and that Aquino and Manila Mayor Joseph Estrada, Ejercito’s uncle, have a good relationship.

Coloma said the public should appreciate the turn of events.

(It is only now that an actual disqualification of a public official pushed through. Perhaps we should look at the positive aspect of this incident, which shows that we are not disregarding the law.)