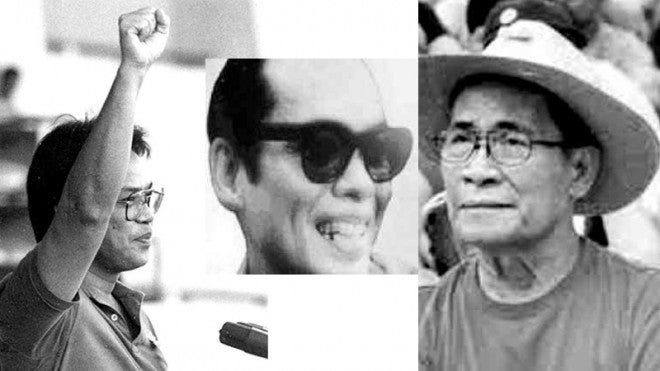 MANILA, Philippines–Three fearless labor leaders, four massacre victims, one Augustinian nun and four other activists were among those honored at Bantayog ng mga Bayani (Monument of Heroes) in Quezon City this week.

Their names brought to 235 the names etched on the black granite Wall of Remembrance, centerpiece of the Bantayog complex that honors those who fought, died or were martyred during the dictatorship of Ferdinand Marcos.

They were all “freedom advocates” who opposed the dictatorship. They lived and died in different ways but had in common a heroic streak that made them worthy to be included in the list of martyrs and heroes etched on the Wall of Remembrance.

The wall stands a few meters away from a towering 13.7-meter (45-foot) bronze sculpture titled “Inang Bayan” (Motherland) created by Eduardo Castrillo. The monument depicts a vertical female figure (symbolizing the Motherland), her left hand raised to the sky in triumph as her right hand lifts up a fallen martyr.

The monument, the commemorative wall and the other structures in the Bantayog complex honor the martyrs and heroes who fought to restore freedom, peace, justice, truth and democracy in the country.

The Bantayog ng mga Bayani Foundation adds more names to the roster of heroes and martyrs as new individuals are nominated and their specific contributions established.

But long before KMU, Olalia was already involved in trade unionism. An icon of the Philippine labor movement, he was a founder of the National Federation of Labor Unions.

Born in Pampanga province to poor farmers, “Ka Bert” studied only up to fourth grade. He worked as a houseboy and in a shoe factory, where his initiation to the trade union movement began.

Olalia followed in the footsteps of Crisanto Evangelista, whose bold leadership of labor unions earned the praise even of then Commonwealth President Manuel L. Quezon.

During World War II, Olalia joined the resistance movement against the Japanese occupation. After the war, he and other labor leaders rebuilt the unions and resumed the agitation for reforms.

In the 1950s, several labor leaders, including Olalia and poet Amado Hernandez, were arrested and jailed on charges of rebellion and for having communist links.

After his release, Olalia, then in his 50s, went back to organizing and advocating for genuine independence from foreign interference.

Shortly after martial law was declared in 1972, Marcos ordered Olalia’s arrest. After his release from prison, Olalia continued championing the cause of the workers.

In the 1980s, he was again thrown in jail. He was then 79 and of frail health. Protests led to his release from prison. He was put under house arrest and died not long after.

Olalia’s son, KMU lawyer Rolando Olalia (1934-1986), and his driver Leonor Alay-ay suffered a brutal death in 1986, just eight months after the Marcos dictatorship was toppled and a few months into Corazon Aquino’s presidency.

Their mutilated bodies were found by a roadside in Antipolo, Rizal province, a day after their disappearance. They were shot at close range, their mouths stuffed with newspapers.

In its report to then President Aquino, the National Bureau of Investigation said the murders were a prelude to the staging of the “God Save the Queen” coup plot by a renegade military group, Rebolusyonaryong Alyansang Makabansa, to rid the Aquino Cabinet of left-leaning members.

After Olalia Sr.’s death, Crispin Beltran (1933-2008) succeeded to the leadership of KMU. Coming from humble beginnings, Beltran never got to finish college. He worked as a janitor, messenger and taxi driver.

In 1955, when he was 22, he helped establish a federation of taxi drivers’ unions, called the Amalgamated Taxi Drivers Association. He was elected president and held the post for eight years.

In 1982, Beltran was one of the labor leaders ordered arrested by Marcos. In 1984, Beltran escaped and went underground.

After democracy was restored in 1986, he continued his work in the labor sector. He later occupied one of the party-list seats in the House of Representatives, representing the Bayan Muna and Anakpawis party-list groups.

In 2006, during the presidency of Gloria Macapagal-Arroyo, Beltran was arrested for rebellion and detained for one and a half years until the Supreme Court ruled that the charges against him were baseless.

Beltran died in a freak accident in 2008.

Starting her religious life as a school-based Augustinian sister with an impressive academic background, Sr. Violeta Marcos (1937-2001) saw the plight of sugar workers while on assignment in Negros Occidental province, often described as a restless social volcano.

In 1975, she gave up schoolwork and immersed herself in social action.

Undaunted by the repressive Marcos regime, Sister Violeta joined the Task Force Detainees (TFD) of the Association of Major Religious Superiors of the Philippines and worked for the defense and release of political detainees.

She joined human rights workers in searching for the missing and helping the victims of military abuses. She helped document cases of arbitrary detention and execution of workers and Church lay leaders.

In 1990, she and some of her fellow religious formed a new congregation, the Augustinian Missionaries of the Philippines, becoming its first head.

Sister Violeta died of an illness in 2001, ending what she called her “dialogue of life with the poor.”

Jose Alcantara (40), Benjamen Suyat (47), Rogelio Guevarra (45) and Elmer Lagarteja (21) were killed on June 14, 1981, in an anti-Marcos rally in Daet, Camarines Norte province. They were among thousands who marched from different towns to Daet’s Freedom Park, shouting “Down with the Marcos dictatorship!” “Raise the prices of copra!” and “Dismantle Cocofed.”

At the Camambugan crossing, they were stopped by soldiers of the Philippine Constabulary led by a Capt. Joseph Malilay. The marchers refused to disperse and, with arms linked, made as if to march ahead. Pushing and shoving ensued between the two sides. Malilay ordered his men to fire.

Malilay was among those seen firing at close range. The PC provincial commander, Col. Nicasio Custodio, was reportedly present during the shooting, which lasted less than a minute.

When the smoke cleared, four unarmed marchers lay dead with more than 40 bullet wounds. Soldiers pursued the fleeing protesters and those caught were lined up by the roadside and threatened with being shot.

Human rights lawyer Jose W. Diokno rushed to the scene the day after the massacre and was detained for a few hours at a military camp.

According to a TFD report, all the wounded and killed were standing at the front of the march; the four who died took direct shots from where the soldiers stood; and no weapons were found on the marchers.

When Marcos declared martial law in 1972, Jorge Checa (1951-1984) went into hiding on learning he was on the military’s wanted list. He and other members of a youth group called Kamanyang went underground and organized the youth in northern Metro Manila.

Checa founded a singing group called Salt of the Earth. The group sang songs to raise people’s awareness about the burning issues of the day.

Checa and his girlfriend Corazon married in 1973 and the couple’s home became the headquarters of community organizers in the area. At the time, organizing was considered a subversive activity.

A few months later, the couple were arrested and detained for three months at Fort Bonifacio.

After their release, the couple headed for Mindanao and joined the anti-Marcos resistance. They lived with farmers and indigenous communities.

Checa and his wife were not always together but they wrote letters to each other. When Checa’s letters stopped coming, his wife feared the worst.

The search for Checa proved to be a perilous journey. Two lawyers assisting in the search, Zorro Aguilar and Jacobo Amatong, were assassinated.

Checa’s remains and those of another person were eventually found. Checa’s body bore multiple stab wounds, which disproved the military’s suggestion of suicide.

A student activist from Manuel L. Quezon University, Gavanzo returned to his home province after martial law was declared and continued his resistance work against dictatorial rule. His home was under constant surveillance and, despite offers of sanctuary by known influential persons, he continued with his work, unprotected.

One day, his family received information that Gavanzo was dead and that his body had been dumped at Bulusan Municipal Hall. Gavanzo’s body bore bullet wounds, his legs and ribs had been broken, and several of his teeth extracted.

A tall man with a gift for public speaking, Venerando Villacillo (1950-1985) studied criminology and martial arts. He dreamed of becoming a detective.

When martial law was declared in 1972, he and other activists went to Isabela province to organize the rural folk. When Isabela became heavily militarized, Villacillo worked among evacuees who had fled their homes.

When things became too hot, Villacillo moved to Mindanao to continue his antidictatorship work. He became a wanted man.

Villacillo and his family were on a trip to Manila in 1985 when he was abducted. His family tried to resist but when his daughter was threatened with a gun he allowed himself to be taken away.

The search for Villacillo yielded nothing. He is missing to this day.

Julieto Mahinay (1935-1984) was a catechist of the Diocese of Surigao del Norte province. He was well liked and respected. People went to him for leadership and guidance.

Mahinay worked with the Episcopal Commission on Tribal Filipinos, a social action arm of the Catholic bishops that served indigenous communities. He worked among the Mamanwa, a semi-nomadic group, holding literacy classes for the Mamanwa while staying in a farm run by the diocese. He taught them farming techniques to help them improve their livelihood.

Mahinay also helped the communities displaced by military operations and land-grabbing activities. He made them aware of their rights.

On March 14, 1984, Mahinay was on his way to Claver National High School to hold a spiritual retreat for graduating students. At a checkpoint of the 36th Infantry Battalion, soldiers stopped the jeepney that Mahinay was riding.

The soldiers found in his possession a Bible and a map of tribal settlements in Mindanao. They let the jeepney and the passengers go but detained Mahinay.

The Free Legal Assistance Group filed a petition for a writ of habeas corpus for Mahinay but to no avail. His family and coworkers followed leads that yielded nothing.

Mahinay was never found. His family believed that the soldiers who seized him were responsible for his death.

Marcos sins, victims’ woes to be taught in schools