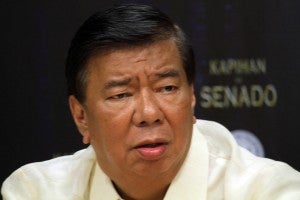 Drilon said he was considering filing the criminal complaint against Syjuco because the poll body’s decision, which found no basis that he and several others had bought votes to secure the victory of Liberal Party ally Arcadio Gorriceta in the 2013 election, showed that Syjuco had made false claims against him.

He said he would avail himself of legal remedies available to any ordinary citizen to protect his name.

“I have to protect my rights. I want to protect my name. I have nothing else to leave behind as legacy except my reputation,” he said in a statement.

Gorriceta had defeated Syjuco for the post of Iloilo representative. Syjuco, a re-electionist, ran under the banner of the United Nationalist Alliance and placed third in the race.

Drilon said Syjuco has been stopping at nothing to malign him and has even resorted to untruths.

“This is a clear proof that Mr. Syjuco would do everything to put my name in a bad light. He has fabricated lies and baseless accusations against me and he will continue to do so just to satisfy his selfish motives of destroying my reputation and credibility as a public servant,” he said.

He added he was grateful to the Comelec for its swift decision on Syjuco’s complaint.

He further said he expected Syjuco to continue his efforts to malign him. Syjuco has filed several criminal complaints against Drilon before the Office of the Ombudsman, which the Senate President described as “malicious and unfounded.”

Syjuco has also volunteered to speak at the next hearing of the Senate Blue Ribbon Committee’s hearing on the alleged overprice of the P700 million Iloilo Convention Center, a pet project of Drilon. The committee chair has allowed him to do so.

Drilon said that while he would protect his rights, he would be willing to answer allegations against him. The Senate president insisted he had nothing to hide and would not hide from inquiries.