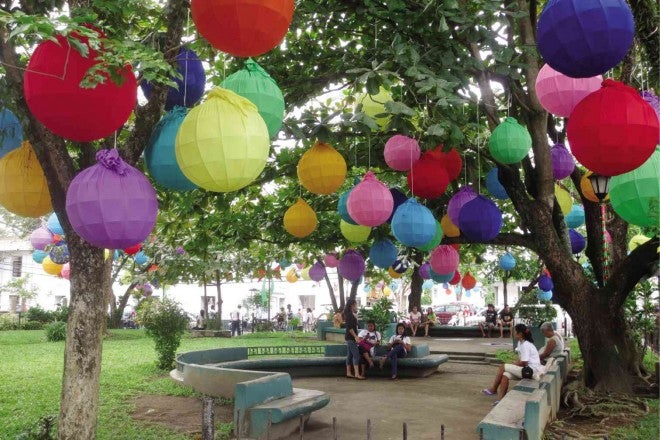 ’TIS THE SEASON EVERYWHERE Outside Metro Manila, the observance of Christmas is just as colorful and colossal as in the Ligao City Park in Albay where balls 2 feet in diameter—all 300 of them—hang from trees. An almost 52-feet Christmas tree covered with 6,000 LED lights that stands beside the park is scheduled to be lighted by city officials on Sunday. MICHAEL B. JAUCIAN/INQUIRER SOUTHERN LUZON

LIGAO CITY, Philippines—Kgill, 5, was awed when he saw 300 huge and colorful Christmas balls hanging from trees at the park here, located some 20 meters from City Hall.

The boy has seldom seen colorful decor during the Yuletide season in Maonon village, a coastal barangay in this city, where he lives.

Kgill’s father, Danjo Iglesia, said they were about to go home when the colorful balls, each measuring two feet in diameter, caught their attention so they decided to stay for half an hour more at the park since his son was enjoying looking at the balls.

“Actually, we visited the health center for a checkup when my son asked me to take a seat at the park, he said.

Iglesia said he would bring his entire family the next time he visits the city.

Judy Pechuela, 18, who was hanging out at the park with her friends, said the display was very attractive as the balls were covered with cloth with the brilliant colors of the rainbow.

“It’s beautiful and relaxing, the spirit of Christmas is in the air,” she said.

Engineer Maricel Panistante, who is in charge of the electric wiring for the Christmas display, said the balls were just some of the attractions at the park that City Hall staff helped put together.

He said visitors to the park would also be delighted to see wrapped giant Christmas gifts, 119 ribbons scattered around the park, an extra-large size Santa Claus and a Nativity scene.