Andres Bonifacio: A monument of lies 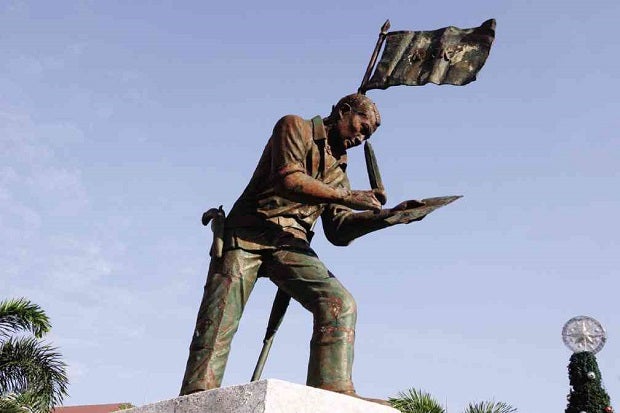 The Bonifacio sculpture stands in front of the Tutuban station: A historical distortion perpetuated even by the most esteemed historians. INQUIRER PHOTO

MANILA, Philippines—In front of the Tutuban Railroad Station in Manila stands a monument of Andres Bonifacio, erected by the National Historical Institute (NHI) in 1971. The inscription on the monument states that Bonifacio was born on that site on Nov. 30, 1863. That’s wrong.

It is true that Bonifacio was born that day but it is erroneous, nay a big lie, to say that he was born in a house in front of the Tutuban station.

According to Manuel Artigas, author of the first Bonifacio biography— “Andres Bonifacio y El Katipunan,” published in 1911—Bonifacio was born in a house on Calle Alvarado, in Binondo district.

Artigas was the director of the National Archives at the time he was writing the Bonifacio biography and had access to all the primary documents about the hero.

Bonifacio’s monument at Tutuban therefore is a disgusting distortion of Philippine history. And it bears the imprimatur of the NHI (now the National Historical Commission of the Philippines).

Origin of the lie

How and why did this distortion of history happen? Who was responsible? And why did the NHI approve the erection of the Bonifacio monument at Tutuban?

I would now trace the provenance of the lie that Bonifacio’s birthplace was in a house opposite or in front of the Tutuban station.

By the way, Manila-Dagupan Railroad Co. started operation only in 1882; thus, there was no railroad station in Tutuban at the time of Bonifacio’s birth.

The first to write about Bonifacio’s erroneous birthplace was Epifanio de los Santos, after whom the Edsa belt highway in Metro Manila, which used to be called Highway 54, was renamed.

De los Santos wrote in an article in the November 1917 issue of The Philippine Review that Bonifacio was born in Tondo district.

He, however, did not mention where exactly in Tondo the Bonifacio house was located.

But he erred because Bonifacio was born in a house on Calle Alvarado in Binondo, not Tondo.

Both monographs asserted that Bonifacio was born in a house in front of the site of the future Tutuban Railroad Station in Tondo.

Cruz was a radical, a fervent Bonifacista and Freemason. In his work, Cruz emphasized that Bonifacio was a Mason and that people should stop considering Bonifacio a poor man because Masonry requires that members of the secret society must be able to support themselves and their families.

In the 1930s, a book, “Useful Lives,” by Herminio Ancheta and Ricardo Galang, repeated the lie of Bonifacio’s birth near Tutuban. Gregorio Zaide held the same view.

After the war, Esteban de Ocampo, professor of history at Far Eastern University, strongly claimed in an article in a leading weekly that Bonifacio was born in a poor house opposite the Tutuban Railroad Station.

At the head of the assertion that Bonifacio’s birthplace was near the Tutuban Railroad Station was nationalist historian Teodoro Agoncillo. In his book on Bonifacio and the Katipunan, “Revolt of the Masses,” page 2, second paragraph, Agoncillo stated: “Bonifacio was born in a poor nipa house of poor parents in what is now the opposite of Tutuban Station.” This statement comes from a former chair of the Universiry of the Philippines (UP) Department of History and the only history professor at UP with the rank of emeritus.

With all the noted historians in the country, especially those from UP, plugging for Tutuban as the site where the house of Bonifacio’s parents stood in 1863, the NHI approved the erection of the Bonifacio monument in front of the old railroad station in 1971. A major distortion of Philippine history was publicly accepted.

Bonifacio’s Tutuban monument is but one of many erroneous monuments and pictures honoring Filipino heroes and commemorating important historical events. These distortions must be corrected. We can start by examining the primary and secondary historical sources that were not read by Filipino historians, even the most esteemed.