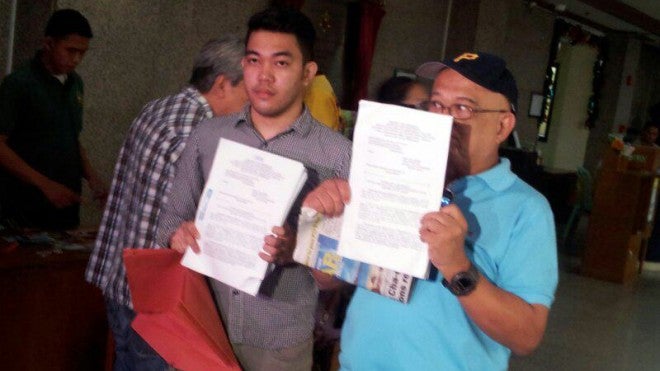 Group “Sentinels of the Rule of Law” files plunder and graft complaint against House Majority Floor Leader Neptali Gonzales II over his alleged misuse of P315 million in Priority Development Assistance Funds (PDAF). The group said they only based their complaint on the Commission on Audit special report on PDAF transactions from 2007 to 2009. Marc Jayson Cayabyab/INQUIRER.net

MANILA, Philippines – Plunder and graft charges have been filed against House Majority Leader Neptali Gonzales II over the alleged misuse of P315-million in pork barrel funds from 2007 to 2009.

The group “Sentinels of the Rule of Law” filed the complaint on Thursday against Gonzales, a Mandaluyong City representative and party mate of President Aquino in the Liberal Party.

According to the 63-page complaint, the government has prosecuted opposition members in the pork barrel scam but has spared administration allies.

“Is it because Congressman Gonzales is one of the pillars of the ruling Liberal Party … that the prosecutorial arms of the government refrain from investigating and prosecuting criminal cases against him?” the complaint said.

It said a special audit report of the Commission on Audit (COA) noted deficiencies in the pork projects of Gonzales and cited ghost projects of which suppliers allegedly denied the transactions.

(The straight path should not only be for opponents but for allies, too.)

Indap said their only evidence was the COA special audit report on the PDAF transactions from 2007 to 2009.

According to the group’s website, they are “decent people advocating Rule of Law and resisting tyranny and despotism.”

The website calls for the impeachment of President Aquino and urges the House of Representatives to “represent the interests of the Filipino people, not the Liberal Party.”

Indap refused to confirm or deny if the Abalos family, political rivals of Gonzales, was behind the complaint.

“I can neither confirm nor deny (that),” Indap said.

He also declined to identify the group’s leader, saying the identity of their head is kept “anonymous.”

For his part, Gonzales suspected that politics is behind the complaint, adding that the spokesperson’s statement of neither confirming nor denying political motive is suspicious.

He clarified that none of his projects went to any ghost projects under the non-government organizations of accused pork barrel scam mastermind Janet Lim-Napoles.

The PDAF was scrapped by the Supreme Court in 2013 amid a public outcry over the alleged P10-billion scam that has led to the detention of three senators and its alleged mastermind Janet Lim-Napoles.