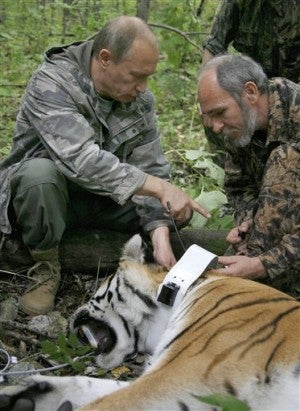 In this file photo taken on Sunday, Aug. 31, 2008, Russia’s then Prime Minister Vladimir Putin locks a collar with a satellite tracker on the tranquilized five-year-old Ussuri tiger in a Russian Academy of Sciences reserve in Russia’s Far East as he took a part in the national program for preserving the population of the Ussuri tiger conducted by researchers of the Russian Academy of Sciences. AP

BEIJING — A rare Siberian tiger released into the wild by Russian President Vladimir Putin is keeping farmers in northeastern China on edge.

China’s official Xinhua News Agency said Wednesday that the animal, named Ustin, bit and killed 15 goats and left another three missing on Sunday and Monday on a farm in Heilongjiang province’s Fuyuan county.

Xinhua said the farm’s owner, Guo Yulin, was stressed about the tiger, but that he would be compensated by the local forestry department for the loss of the 18 goats.

According to Xinhua, Russian experts rescued five tiger cubs two years ago. Ustin was one of three released by Putin in May in a remote part of the Amur region, which straddles the border between far eastern Russia and northeastern China.

Two of the tigers entered China. They were fitted with tracking devices and are monitored by Chinese wildlife protection workers.

The other tiger to enter China, Kuzya, was believed to have raided a farm and eaten five chickens last month in another Heilongjiang county.

Guo told Xinhua that he was alerted by dog barks on Sunday night, but that his check turned up nothing unusual. He said he woke up the next morning to find two goats dead and three others missing.

Xinhua said the goats’ skulls were crushed by the tiger and that a hole the size of a human finger was visible on each goat’s head.

The farmer said the tiger returned the following night but made no noise at all.

“When I opened the goat house in the morning, dead goats were everywhere,” Guo said, according to Xinhua.

Local experts found the tiger’s footprints around the goat house and on its roof, Xinhua reported. Guo was asked to either relocate his goats or reinforce his farm, it said.