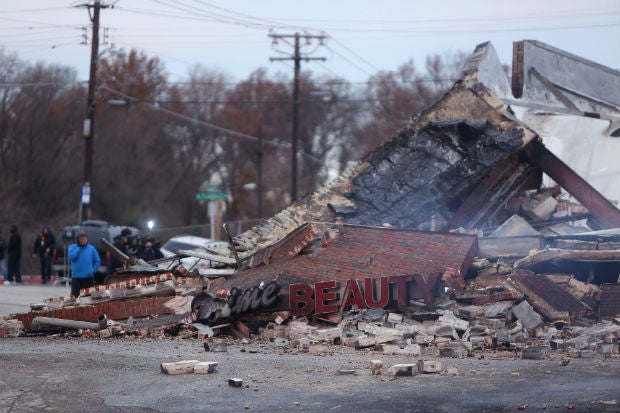 Smoldering remains is all this left of a beauty supply that burned to ground Tuesday, Nov. 25, 2014, in Dellwood, Mo. The building and several others in and around Ferguson were burned during protests after a grand jury decided not to indict a white police officer in the killing of unarmed black 18-year-old Michael Brown. AP

FERGUSON, Missouri — Missouri’s governor ordered hundreds more state militia into a St. Louis suburb Tuesday after a night of protests and rioting over a grand jury decision’s not to indict a white police officer in the killing of an unarmed black 18-year-old, a case that has inflamed racial tensions in the U.S.

Attorneys for the family of the slain young man, Michael Brown, criticized the grand jury’s decision as rigged but appealed for peace.

The decision announced Thursday night means Officer Darren Wilson will not face any state criminal charges in the Aug. 9 shooting, which reignited debates over relations between police and minority communities, even in cities far from Ferguson, the St. Louis suburb where Brown was killed.

Wilson, in an interview with ABC News, said he has a clean conscience because “I know I did my job right.”

Wilson, who has been on leave since the Aug. 9 shooting, told ABC that Brown’s shooting marked the first time he had fired his gun.

Several protests broke out for a second day in the St. Louis area and other cities. About 300 people marched from a park to the St. Louis courthouse, chanting “You didn’t indict. We shall fight.” Police used pepper spray and arrested several demonstrators who blocked major intersections in St. Louis.

In Ferguson, 12 commercial buildings were burned down and other businesses were looted during overnight protests, authorities said.

The protests that followed the grand jury decision quickly became chaotic, with protesters looting and setting fire to businesses and vehicles, including at least two police cars. Officers eventually lobbed tear gas from inside armored vehicles to disperse crowds.

Gov. Jay Nixon said more than 2,200 National Guardsmen — state militia — will be in place in the region near Ferguson on Tuesday night in the event of more violence. He said hundreds more will be deployed to Ferguson.

President Barack Obama deplored the destructive acts, saying they are criminal and those responsible should be prosecuted. But America’s first black president said he understands that many people are upset by the grand jury decision.

“The frustrations that we’ve seen are not about a particular incident. They have deep roots in many communities of color who have a sense that our laws are not always being enforced uniformly or fairly,” Obama said.

There were 61 arrests in Ferguson overnight and 21 in St. Louis. At least 18 people were injured, including someone who was shot and was recovering at a hospital.

Attorneys for Brown’s family stressed that those setting fires and engaging in violence were not on Brown’s side.

The attorneys also said they hope that a federal civil rights investigation will result in charges against Wilson.

The Justice Department is conducting a separate investigation into possible civil rights violations, but investigators would need to satisfy a rigorous standard of proof in order to mount a prosecution. The department also has launched a broad probe into the Ferguson Police Department, looking for patterns of discrimination.

Wilson’s lawyers issued a statement praising the grand jury’s decision and saying the officer, who has remained out of the public eye since the shooting, is grateful to his supporters.

Wilson told jurors that he initially encountered Brown and a friend walking in a street and, when he told them to move to a sidewalk, Brown responded with an expletive. Wilson then noticed that Brown had a handful of cigars, “and that’s when it clicked for me,” he said, referring to a radio report minutes earlier of a robbery at a nearby convenience store.

Wilson said he asked a dispatcher to send additional police, and then backed his vehicle up in front of Brown and his friend. As he tried to open the door, Wilson said Brown slammed it back shut.

The officer said he pushed Brown with the door and Brown hit him in the face, leading him to draw his gun and threaten to shoot Brown. He said Brown grabbed the gun and, fearing for his life, he fired it. Brown then fled and Wilson gave chase. At some point, Brown turned around to face the officer.

Witness accounts were conflicted about whether Brown walked, stumbled or charged back toward Wilson before he was fatally wounded, McCulloch said. There were also differing accounts of how or whether Brown’s hands were raised. His body fell about 153 feet (46 meters) from Wilson’s vehicle.