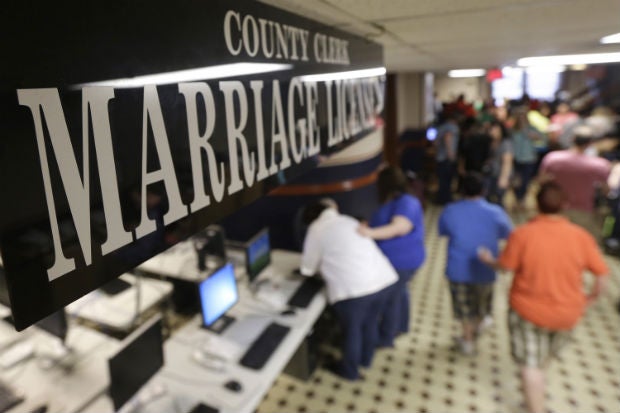 In this file photo taken May 12, 2014, the first day Pulaski County issued marriage licenses for same-sex couples, lines form at the County Clerk’s window for marriage licenses at the Pulaski County Courthouse in Little Rock, Ark. A federal judge struck down Arkansas’ gay marriage ban on Tuesday, Nov. 25, 2014, which could pave the way for county clerks to resume issuing licenses. AP

LITTLE ROCK, Arkansas — A federal judge struck down Arkansas’ gay marriage ban on Tuesday, which could pave the way for same-sex marriages in another conservative southern state, though the ruling faces an appeal.

Judges across America have ruled against bans similar to Arkansas’ since the U.S. Supreme Court struck part of a federal anti-gay marriage law in June 2013, and gay marriage rapidly became legal in more than half of the U.S., including several traditionally conservative states.

U.S. District Judge Kristine Baker ruled in favor of two same-sex couples who had challenged a 2004 constitutional amendment and earlier state law defining marriage as between a man and a woman, arguing that the ban violated the U.S. Constitution and discriminated based on sexual orientation. But Baker put her ruling on hold, and the state is expected to appeal it to the 8th U.S. Circuit Court of Appeals, based in St. Louis.

Baker wrote in her ruling that the state’s marriage laws violate the U.S. Constitution by “precluding same-sex couples from exercising their fundamental right to marry in Arkansas, by not recognizing valid same-sex marriages from other states, and by discriminating on the basis of gender.”

Arkansas Attorney General Dustin McDaniel could not immediately be reached.

The ruling comes as the state Supreme Court weighs a separate case challenging the ban. Justices are weighing whether to uphold Pulaski County Circuit Judge Chris Piazza’s decision in May striking down the 2004 amendment and earlier state law as unconstitutional. Piazza’s decision led to 541 same sex couples getting married in the week before the state Supreme Court suspended his ruling.

Justices have not indicated when they will rule in that case. The lawsuit before the state Supreme Court also argues the ban violates Arkansas’ constitution.

TAGS: Arkansas, Gay marriage, US, US Constitution, US Supreme Court