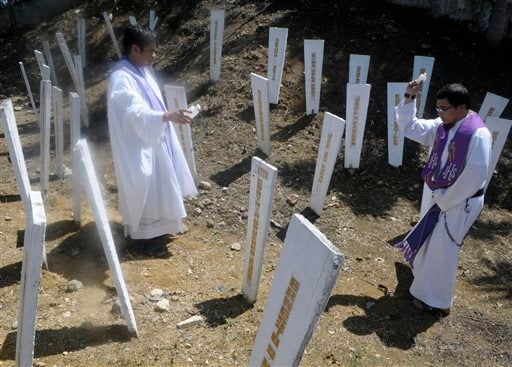 In this Nov. 21, 2014 photo, Roman Catholic priests bless the wooden markers at the site where 58 people, 32 of them journalists, were massacred at a remote village in Ampatuan township, Maguindanao province in southern Philippines. Sunday Nov. 23, 2014 marks the fifth anniversary of the massacre, in Maguindanao, southern Philippines with the Ampatuan clan tagged as the prime suspects in the carnage. The massacre of 58 people is the country’s worst election-related violence. (AP Photo/Bullit Marquez)

MANILA, Philippines–Malacañang on Sunday hailed as “martyrs” the 32 journalists killed with 26 other people in the Maguindanao massacre five years ago.

The Palace also vowed that justice will be served for the victims, whose killers have yet to be convicted because of the sluggishness of the Philippine judicial system and despite the government’s frequent acknowledgment that “justice delayed is justice denied.”

To mark the fifth anniversary of the massacre, 700 protesters from Mindanao marched from Las Piñas City to Baclaran in Parañaque City on Sunday and demanded an end to impunity and injustice prevailing in their region.

Journalists and human rights groups in different parts of the country lighted candles and renewed their call for justice for the victims and their families.

Communications Secretary Herminio Coloma said the government “will not stop promoting and protecting the healthy exercise of press freedom.”

“We remember the martyrdom of the 32 journalists and media workers,” he said over government radio, referring to the group that joined the family of now Maguindanao Gov. Esmael Mangudadatu in filing his certificate of candidacy.

These media workers were among the 58 people who were executed and later buried using a backhoe, allegedly on orders from then Maguindanao Gov. Andal Ampatuan Sr.

Of the 197 accused, only 113 have been arrested five years since the massacre in Ampatuan town, Maguindanao province, on Nov. 23, 2009.

“The government is fully determined to get justice [for the victims]. Our campaign continues against criminality, in going after groups and individuals using violence to conceal the truth,” Coloma said.

As the trial drags on, the body count continues to rise.

The latest victims were Dennis Sakal and Sukarno Butch Saudagal. They had previously worked for the Ampatuans but agreed to testify against them.

The two men were riding a motorcycle when gunmen attacked them last Tuesday, killing Sakal and wounding Saudagal. Police have not identified the attackers.

Mangudadatu earlier described Sakal and Saudagal as “vital witnesses to the massacre.”

Sakal was said to be a former driver of Ampatuan, while Saudagal allegedly served as bagman for Ampatuan Jr.

“They were to meet my lawyers to formalize their testimonies [when they were attacked],” Mangudadatu said.

“I see no other reason why they would be ambushed aside from their desire to become state witnesses,” he said.

Coloma said the government was aware of the “need to pursue meaningful reforms in the judicial system of the country so we can put an end to the saying that ‘justice delayed is justice denied.’”

Justice Secretary Leila de Lima last week said the case had been slow because of its sheer size and complexity.

She said, however, that the “first in, first out” policy adopted by the court could lead to decisions on the charges against the principal accused by 2016.

Chief Justice Maria Lourdes Sereno on Sunday said the Supreme Court had taken “extraordinary measures” to ensure the speedy disposition of the case.

Speaking at the Journalism Asia Forum in Quezon City, Sereno said she could not say when the “shocking” case would end.

“The only answer I can [give] you with all sincerity is that the judiciary is doing its best, the Supreme Court exercising its power in a way it has never done before, to bring a speedy end to the long, anguished wait,” she said.

Sereno gave assurance that she was personally keeping track of the case to ensure a speedy trial.

“In 2013, the Supreme Court came up with new guidelines to speed up the disposition of the Maguindanao [massacre case]. The guidelines apply only to this case. This is extraordinary. The Supreme Court has never done this before,” she said.

Sereno said the trial had “proceeded nonstop” since it started on Jan. 5, 2010, with breaks only for official holidays. Two days a week are devoted to evidentiary hearings, one day a week for hearing motions, she said.

She said Judge Jocelyn Solis-Reyes of Quezon City Regional Trial Court Branch 221 was “focused only on this case, having been relieved of all other duties.”

She said the transcripts of the hearings had reached 70 volumes; the records for the case, 77 volumes.

Sereno ran down the figures: 58 victims; 197 originally accused and 111 arraigned; 70 bail petitions, 42 of which have already been resolved; 166 witnesses have testified.

“These data explain in part the long trial,” she said.

In Parañaque, the protesters lighted candles in front of Baclaran Church and prayed for the massacre victims.

Rev. Christopher Ablon, spokesman for the Manilakbayan march, said the activity marked the 12th day of the march from Mindanao and was held to remember the victims and reiterate the protesters’ call for justice.

“We vehemently seek speedy justice for the victims and [their] families. It’s been five years now and counting, and yet the criminal warlords of Mindanao are enjoying the comfort of their prison cells,” Ablon said, referring to Ampatuan and his sons who are detained.

The massacre, Manilakbayan said in a statement, is “a symbol and reminder of the culture of impunity that exposes the rotten system of justice and government in the country.”

The “culture of impunity and systematic killings” continue in Mindanao and the Maguindanao massacre is just one incident, Ablon said. “There are already 100 cases of extrajudicial killings recorded under the present administration,” he added.

Journalists and human rights groups also lit candles in Iloilo and Bacolod cities on Sunday to remember the massacre victims and press their demand for justice.

In Bacolod, members of Negros Press Club (NPC) wearing red gathered at the steps of the provincial capitol, where a program and candle-lighting ceremony were held.

They reiterated their call for justice for the 58 victims, among whom were two journalists from Negros Island—Bart Maravilla of Bombo Radyo and Henry Araneta of Manila Broadcasting Co.

NPC-Bacolod president Carla Canete called on President Aquino and De Lima to help ensure a fair, just and speedy resolution of the case.

“We will continue to press for justice for the victims to attain peace and justice for all concerned,” Canete said.

“We should likewise continue to be vigilant against any attempt to muzzle the press and curtail our freedom of expression,” she said.

In Iloilo City, members of Iloilo Press Club (IPC), National Union of Journalists of the Philippines and human rights group Panay Alliance-Karapatan gathered at Plazoletagay, the main intersection, to show solidarity with the families of the victims.

“The slow pace of the case epitomizes the country’s justice system, where the victims and their families suffer the long delay if not lack of resolution of their cases,” said Reylan Vergara, secretary general of Panay Alliance-Karapatan.

Francis Allan Angelo, IPC president, said the unresolved case was a “sad reality” and a “stain” on the good government policy of Aquino.

“The culture of impunity is a badge of dishonor not only for the government but also for the nation,” Angelo said.

The Philippines will remain one of the most dangerous places for journalists “as long as justice remains elusive for our slain colleagues and the other victims of the massacre,” he added.

The protesters later released white doves as a symbol of their call for justice for the victims.

In Buluan town, Maguindanao, journalists threw a “media jam” on Saturday to remember the victims. They took turns singing and speaking about their slain colleagues.

“She used to sing a lot,” Malabanan said. “Of course, I miss her. No words can describe how I feel. The anger is still there because after all these years, the perpetrators have not been punished. But I’m not losing hope that justice will be served.”

Junjie Dimacutac of dzRH radio sang country songs and his own composition, “Nobyembre 23.”

“I wrote this song so we may not forget the day,” he said.

The title, according to one journalist, appears to describe the pit where the massacre victims were dumped by the killers.

At dusk in Manila, members of various local and foreign media groups converged at the People Power Monument on Edsa to light candles and remember their slain colleagues.

The crowd was made up mostly of delegates to international journalism conferences held at the nearby Crowne Plaza Manila Galleria Hotel earlier in the day. Most of them changed from business wear to black shirts to show their solidarity with the Philippine press in seeking justice for the victims of the massacre.

At the foot of the monument, a screen and projector were set up to show pictures of the victims. With the pictures came the words: “58 people killed, 0 convicted. Don’t let their memory fade. Tweet for Justice #AmpatuanMassacre.”

Members of the College Editors Guild of the Philippines chanted: “Fight for media rights. End the killings.”

Inquirer reporter Marlon Ramos handed out black shirts, care of National Union of Journalists of the Philippines, that read: “58 dead.