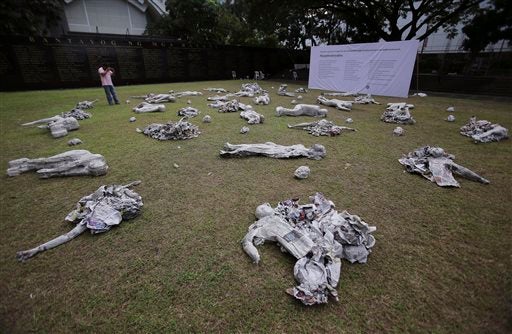 A photographer takes pictures of an art exhibit to mark the 5th anniversary of the massacre of 58 people, 32 of them journalists, in suburban Quezon city, north of Manila, Philippines on Sunday, Nov. 23, 2014. AP

MANILA, Philippines – To commemorate the fifth anniversary of the Maguindanao massacre, about 700 protesters from Mindanao marched from Las Piñas to Baclaran in Parañaque on Sunday and called on the government to end the culture of impunity and injustice still prevailing in their region.

The Mindanao People’s Mobilization for the Defense of Land, Environment and Human rights or the Manilakbayan, composed mostly of Lumads and Moros, led the protest along with other sectors from Southern Tagalog. Some of the rallyists even wore their traditional attire during the march.

The marchers held a candle lighting protest in front of the Baclaran Church on Sunday afternoon to pray for the souls of the victims of the Maguindanao massacre and to condemn the killings still happening in their region.

Manilakbayan spokesperson, Fr. Christopher Ablon, told the Philippine Daily Inquirer that Sunday’s activity was the 12th day of their travel from Mindanao to Metro Manila to remember the 58 victims and reiterate the call for justice.

“We vehemently seek for speedy justice for the victims of the massacre and their families. It’s been five years now and counting, and yet, the criminal warlords of Mindanao are enjoying the comforts of their prison cells,” Ablon added.

The massacre, according to Manilakbayan, serves as “a symbol and reminder of the culture of impunity that exposes the rotten system of justice and government in the country.”

Ablon said that the “culture of impunity and systematic killings” has persisted on the island and has evolved into what they now term as “Mindanao massacre.”

“There are already about 100 cases of extrajudicial killings recorded under the present administration,” the Manilakbayan spokesperson added.

The group also slammed Communications Secretary Herminigio “Sonny” Coloma Jr. for saying that those calling President Aquino as the “impunity king” had no basis and were excessive in their claim.

“We do not just count and document cases of human rights violations. We shall be saying over and over again that there are about 55 Army battalions now in Mindanao. This is not baseless,” Ablon said in response to Coloma’s statement.

The human rights violations suffered by their tribes have “strengthened their resolve” to expose those responsible not only in Mindanao but also government officials in Manila, the Manilakbayan spokesperson added.

On Monday (Nov. 24), the group will gather in Mendiola, Manila, for another protest rally. Ablon said they would camp out there until the celebration of the International Human Rights Day on Dec. 10 where other groups would join them in a bigger protest action.