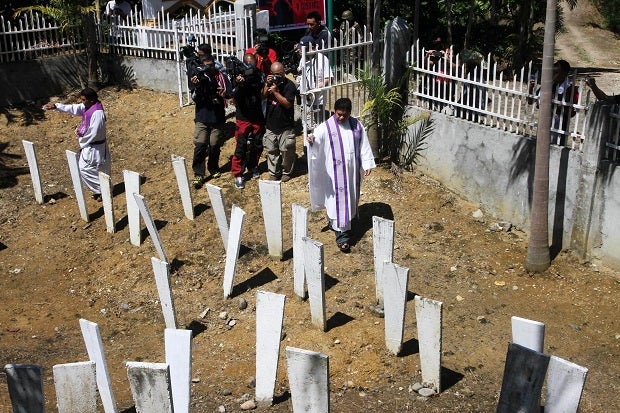 Catholic priests bless markers where 58 people were killed at the massacre site in Ampatuan town, Maguindanao province, in southern island of Mindanao on November 21, 2014, ahead of the fifth anniversary of the worst political massacre of the country. AFP

Five years after the 2009 Maguindanao massacre, the trial of the suspected killers has made private prosecutor Gilbert Andres realize the systematic weaknesses of the Philippine judicial system.

Andres and other lawyers for the families of the 58 victims note a pressing need for reforms, which becomes more glaring as years pass without assurance of justice for the complainants.

“The arrest of the almost 200 accused, it has never happened. That itself is a weakness. And the judicial system offers a lot of opportunities, like insignificant orders being questioned, [to slow] down the process,” said Andres of Center for International Law (CenterLaw).

Over the past five years, only 113 of the original 197 accused have been arrested, with three eventually being dropped from the charge list and one dying in jail.

According to the Quezon City court handling the case, 110 have been arraigned while 70, including the primary accused Andal Ampatuan Jr., his father, Andal Sr., and brother Zaldy, have filed petitions for bail.

This year has been marked by controversies and changes. Only last month, Judge Jocelyn Solis-Reyes of Regional Trial Court Branch 221 allowed each of 41 accused, all policemen, to post bail of P200,000 for each of the 58 counts of murder, or a total of P11.6 million.

Of the 58 victims, 32 were media workers who, on Nov. 23, 2009, rode in a convoy led by Genalin Mangudadatu, who was going to file the certificate of candidacy for governor of Maguindanao province of her husband, then Buluan town Vice Mayor Esmael Mangudadatu, challenging the Ampatuans.

A check with the court showed that no one among the accused policemen has posted the huge bail.

In August, private prosecutor Nena Santos, lawyer for Mangudadatu, and her colleague Prima Jesusa Quinsayas accused the public prosecutors of accepting bribes from the Ampatuans and of leaving them out of meetings on the case.

Justice Secretary Leila de Lima ordered an investigation into the alleged bribery but the National Bureau of Investigation found no evidence that the prosecutors had taken bribes from the accused.

Roque’s CenterLaw represents the families of some of the slain media workers.

The members of the prosecution panel have been replaced three times since the case was first filed in late 2009.

The current panel is led by Taguig City Prosecutor Archimedes Manabat, who took over after Medalle asked to be transferred back to Zamboanga province in 2012.

Also in August, a handful of defense lawyers representing the Ampatuan clan, their supporters and other accused withdrew from the case after almost five years of defending them.

Judge Reyes, who earlier said she wanted to hand down a decision by the time President Aquino steps down in 2016, was unfazed.

Reyes did not comment on the controversies involving the lawyers, saying the court must be left out of the matter.

“I am still hopeful that we can have a partial decision for some of the accused by 2016,” she said, citing a Supreme Court ruling last year allowing the prosecution to rest its case against some of the accused without waiting for the presentation of evidence against all other accused.

To hasten the proceedings, the court conducts hearings twice a week and has heard the testimonies of 157 witnesses. The defense is now presenting evidence to support the bail petitions of some of the accused.

Santos said she doubted that the whole case could be finished by 2016, citing the postponements of hearings that further slow down the trial.

“But in so far as the other accused [are concerned], we can still get partial judgment, depending on the court to dispense with corroborative witnesses presented by the accused,” she said.

Despite the physical, emotional and mental toll the case is taking on the complainants, Santos said they would press the fight, adding that they respected the court processes.

Lawyer Romel Bagares of CenterLaw said the sheer number of the accused and the complainants made the case “difficult to manage.”

“The defense panel is also new. There is no assurance … that they will stick [around] and finish the case,” he said.

Roque, chair of CenterLaw, said President Aquino must fulfill the state’s obligations under international law and provide adequate reparations, including compensation, to the families of the victims.

He pointed out that the government paid P1.5 million to the family of a Taiwanese fisherman who was shot dead by Philippine coast guards in Balintang Channel last year.

Roque wondered why the government could not pay the families of the Maguindanao massacre compensation with dispatch as the family of the Taiwanese fisherman.

“Sadly, the Philippines discriminates against its own citizens and reveals gross ignorance of its state obligations under international human rights law,” Roque said.

Turn of the defense

It is now the turn of the defense to present rebuttal evidence for the bail petitions of Andal Jr. and Zaldy.

Lawyer Salvador Panelo, Andal Jr.’s new lawyer, will present witnesses and evidence in December after Zaldy’s lawyer, Andre de Jesus, is done with his own presentation.

Panelo said in an interview that he accepted the gargantuan task of defending the Ampatuan clan because he was convinced that his clients were “framed.”

He said that contrary to public perception that the Ampatuans are filthy rich, the once-powerful clan is now poor, with his clients selling a car and pawning a Rolex watch to “tide them over.”

“I listened to their story and I accepted the case not for money. They are poor now. Someone has to take the cudgels for them,” Panelo said.

He said he had been warned that defending the Ampatuans was too controversial and could damage his career, but he argued that he was no longer a stranger to controversy.

Panelo conceded that public perception was against the Ampatuans but he insisted that he believed they were innocent.

“The challenge is there,” he said. “But one thing is for sure: I will not lie for my client.”

But the passing of the years has not weakened the resolve of the prosecution to see the case to the end.

“We cannot [allow] the impunity with which it was committed and the lack of will of the executive. Changes need to be done so that it won’t happen again,” Andres said.

QC judge admits most of evidence vs Ampatuan Jr.

Lawyers for the Ampatuans in the Maguindanao Massacre case withdraw