What Went Before: Worst election-related violence in PH history 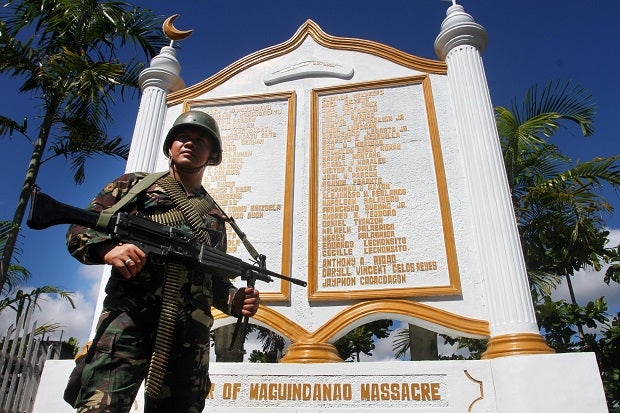 A Philippine soldier stands guard next to the marker where 58 people were killed at the massacre site in Ampatuan town, Maguindanao province, in southern island of Mindanao on November 21, 2014, ahead of the fifth anniversary of the worst political massacre of the country. Five years after 58 people were killed in the Philippines’ worst political massacre, anger among victims’ relatives is building, with no one yet convicted and the alleged masterminds still enjoying power. AFP

On Nov. 23, 2009, 58 people were killed in an ambush in Maguindanao province in the worst election violence in Philippine history.

It was a Monday morning and Genalin Mangudadatu, together with a group composed of relatives and supporters, lawyers and journalists, set out from Buluan town for Shariff Aguak town to file the certificate of candidacy for Maguindanao governor of her husband, then Buluan Vice Mayor Esmael Mangudadatu.

Just an hour after their departure, armed men stopped their convoy at the boundary of Ampatuan and Shariff Aguak towns. What happened next would become known as the Maguindanao massacre.

Those killed in the carnage were Mangudadatu’s wife, 14 relatives and supporters who were mostly women, two lawyers and the father of one of the lawyers, two drivers, 32 media workers and six motorists who were either witnesses or mistakenly identified as part of the convoy.

They either lay dead on the ground or were hastily buried in a mass grave, some of them beheaded and others raped and mutilated.

The Ampatuans, a political clan that has been engaged in a long-running feud with the Mangudadatu family, were tagged the masterminds of the massacre. It was carried out to stop then Vice Mayor Mangudadatu from running for the post, which was held then by Andal Ampatuan Sr. and which his son and namesake, then mayor of Unsay town, was seeking to fill.

Five years after, justice remains elusive. The trial of the Ampatuans, which began in 2010, has dragged on and is expected to run even beyond the term of President Aquino. A total of 197 people are under trial. Judge Jocelyn Solis-Reyes of the Quezon City Regional Trial Court Branch 221 is hearing the case.

More than half of the accused (111 people) have been arraigned and 41 have been granted bail, mostly policemen belonging to the 1507th and 1508th Provincial Mobile Groups of the Philippine National Police regional office in the Autonomous Region in Muslim Mindanao, the Center for Media Freedom and Responsibility said in a primer released earlier this month. The policemen were assigned to man checkpoints in Ampatuan, Maguindanao, where the killings happened.

Twenty-one of those charged, including members of the Ampatuan clan, are awaiting the court’s decision on their petitions for bail.

Ampatuan Jr. surrendered three days after the massacre while Ampatuan Sr. and other members of the Ampatuan clan were arrested days later. They were brought to and detained at Camp Bagong Diwa in Bicutan district, Taguig City. Other suspects numbering more than a hundred are also in jail.

A setback for the families of the victims: A vital witness in the massacre was killed on Nov. 18 while another was injured when they were ambushed on their way to a meeting with lawyers in Shariff Aguak.

Dennix Sakal, former driver of Ampatuan Sr., was killed and Sukarno Butch Saudagal, allegedly the former bagman of Ampatuan Jr., was wounded in the ambush. They were supposed to finalize their testimonies, according to Mangudadatu, now governor of Maguindanao.

Earlier this year, the case hit a snag when private prosecutors and state prosecutors had a spat over allegations of bribery, while the lawyers representing the Ampatuans withdrew from the court proceedings.

The bickering started on July 31, when private prosecutors Nena Santos, lawyer for Mangudadatu, and Prima Jesusa Quinsayas revealed differences with the government prosecutors.

They protested the strategy of prosecutors from the Department of Justice (DOJ) and other private lawyers to rest the state’s case against primary accused Ampatuan Jr. and 27 others. The DOJ explained that it was a “first in, first out plan,” sought to reach a partial promulgation before the end of Mr. Aquino’s term in 2016.

A few days later, Santos disclosed that the Ampatuans had offered her P300 million, hinting that state prosecutors might have accepted bribes after she declined.

Another witness also surfaced in August and bared an alleged bribe list containing the names of those supposedly on the take.

Defense lawyers for the principal suspects withdrew from the case, a move that, private prosecutors say, was a strategy to delay the trial.

The trial started on Sept. 8, 2010, almost 10 months after the massacre. During the first hearing, Saliao, a house help, directly linked Ampatuan Jr. to the killings allegedly on the orders of his father. He said the Ampatuan clan planned the massacre over dinner on Nov. 17, 2009. Both Ampatuans pleaded not guilty during their arraignment.

Saliao said Ampatuan Jr. led the force of more than a hundred, mostly police and paramilitary troopers, that carried out the massacre. Inquirer Research

No police ban on coverage of Maguindanao massacre trial–spokesman