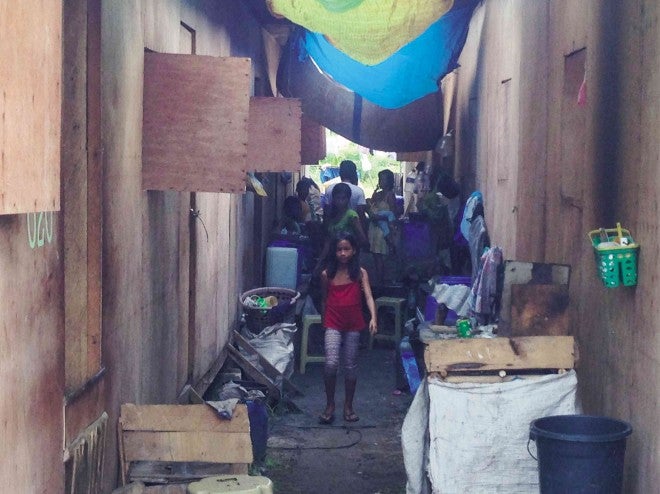 DISPLACED residents from the sinkhole in Barangay Langub compare their situation to that of a squatter’s area. Here there is no water and power supply making their living conditions difficult.

KINATARCAN ISLAND, Cebu—Will her family have a permanent home? Marlie Desabille is running out of hope.

“It has been a year. But we have not received any shelter assistance. We are not aspiring that we will receive one,” she says in Cebuano.

The Desabilles are among the 175 fishing families on Kinatarcan Island off northern Cebu who are still staying in tents after Supertyphoon “Yolanda” struck on Nov. 8, 2013. The shelters have been set up in front of their houses which the storm either destroyed or damaged.

The tents were donated by two nongovernment organizations (NGOs)—Shelter Box and Islamic Relief.

At least 20 other families have moved to bunkhouses from their houses near a sinkhole that appeared on the island in July. Built by the municipal government of Sta. Fe, which has jurisdiction over Kinatarcan, the bunkhouses have no water or power supply, and are 1.2 kilometers away from the shoreline and fishing ground. 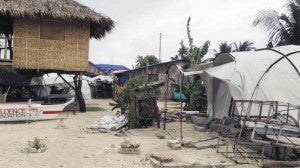 AT LEAST 50 families in Langub are still living in tents more than a year after Supertyphoon “Yolanda” devastated the Visayas on Nov. 8, 2013.

Desabille, her husband Dindo and their five children live in a tent, which measures 4.5 by 4.5 meters and 2.4 m high, in Barangay Langub. Some parts of the tent are already torn, and when it rains, the family uses an umbrella to keep rainwater from dripping inside.

The village chief, Rolando Villacarlos, says the national government has not given permanent homes to the families because they failed to meet one of the requirements by the National Housing Authority (NHA)—land titles—and could show only municipal tax declarations.

But land in Kinatarcan cannot be titled because the island has been declared a protected area.

Located about 20 km from the more popular Bantayan Island, the island used to be called Guintacan from the Cebuano word “Gintaakan,” meaning “to step,” since the shape of the island looks like a footprint. The name was later changed when the Spanish colonizers arrived because they had difficulty pronouncing it, Villacarlos says.

Kinatarcan is a piece of paradise with a kilometer-long stretch of white-sand beach and clear blue waters in Langub’s Sitio Pasil. It also boasts of a cave and a lagoon which islanders call “Laaw,” in Barangay Hagdan. 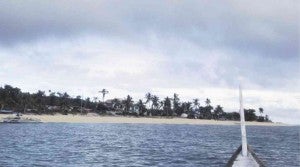 THE 1-KILOMETER stretch of beach in Sitio Pasil, in Langub is among the attractions that Kinatarcan can offer.

Despite its tourism potential, the island was never developed into a destination, apparently because of its distance from the mainland. It has no resort nor hotel, and the residents rely on fishing to survive.

The island is an hour away by boat from Sta. Fe and 45 minutes by boat from Daanbantayan town, 131 km from Cebu City. Because of the distance, only a few NGOs and private groups have reached Kinatarcan to help the survivors of Yolanda.

Bringing in housing materials is also more costly because only small motorized boats can dock on the island in the absence of a port. According to one boat owner, Jonathan Sestoso, rental for a service boat with a carrying capacity of 10 people is P2,500—P2,000 for one with a five-person capacity and P500 for one that can transport only two.

Only a few private groups have helped Kinatarcan residents because of the transportation costs, Sta. Fe Mayor Jose Esgana says. “If it’s very far, they would say that they had to pay for transport on top of other expenses,” he adds.

Sta. Fe has only one truck which is being used by some NGOs and private groups to deliver construction materials to survivors in the mainland, Esgana says.

Although it has been more than a year since the storm struck, most houses are still in shambles. According to the municipal social welfare and development office, 1,110 houses were destroyed while 430 others were damaged as of March this year, dislocating 1,901 of 1,962 families.

No fatality was recorded but 386 people were injured—270 in Hagdan, 58 in Langub, and 58 in Barangay Kinatarcan.

Esgana says the municipal government does not have enough funds to help the islanders. So far, it has received only P5.58 million in Emergency Shelter Assistance (ESA) from the Department of Social Welfare and Development, which was given to 558 families in Langub (P10,000 each), he says.

Sta. Fe has yet to receive P77.57 million in ESA for other survivors, Esgana says. 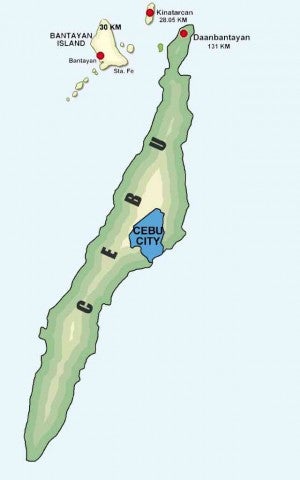 A total of 2,305 families need to be relocated after their houses were found to be in the danger zones. Until now, the mayor says he has not received any word from the NHA on the relocation site.

In Sitio Dapdap in Langub, only 20 of the 50 families have evacuated after the Mines and Geosciences Bureau found the sinkhole about five meters away from their houses. They are now staying in the bunkhouse far from the shoreline and erected on a lot owned by the Villacarlos family.

Richel Gilbuena, 33, who has been living in the bunkhouse with her family since August, says her husband Gil used to catch fish worth P200 a day before Yolanda. His haul has dropped by more than half and not enough to feed their five children.

The health of the children has also deteriorated, Gilbuena says. “I always have chills. My children, especially my youngest, always have bouts of coughs and colds. We barely have enough for food since we need to buy medicine for my youngest,” she says in Cebuano.

There is no water and electricity supply in the bunkhouses. For drinking water, the families use tarps to catch rainwater. They cannot afford to buy bottled water being sold at P40 per 5-gallon container.

Bantayan Island Electric Cooperative provides power to Kinatarcan, but only from 5 p.m. to 10 p.m. The bunkhouses do not have power connections.

Gilbuena says her family was still hoping that they would be given a new house by the government.

“We feel like squatters and pigs cramped in a small box,” she says.