For Eva Celestino, who lost her brother Rufino in the Ozone Disco Club fire in 1996 that claimed the lives of 161 others, the battle has not yet been won.

She found out that those who were found guilty by the Sandiganbayan on Thursday for failing to detect the structural deficiencies of the club could still go to the Supreme Court and appeal the Sandiganbayan ruling, after all.

“It’s not yet over. So that’s another 10 years of waiting for us. Wait for the next chapter,” said Celestino, who appeared surprised when told about the verdict meted out by the antigraft court to seven Quezon City personnel and two stockholders of the club over the phone.

It was only on Thursday, or 18 years and 8 months after the tragedy, that the Sandiganbayan sentenced the city personnel and businessmen to up to 10 years in prison for the fire on Timog Avenue that also left 93 others injured.

The same penalty was meted out to businessmen Hermilo Ocampo and Ramon Ng, stockholders of Westwood Entertainment Co. Inc., the operator of the dance club.

Pabulayan said the nine would not be immediately arrested as they have 15 days to appeal the ruling.

However, Santos voiced concerns about the time it took for the verdict to be delivered, saying he feared those convicted had left the country.

Dante Jimenez, founder of an anticrime advocacy group that helped the survivors with court cases, said some of the survivors had died before justice was served.

“This reflects how rotten the justice system is,” Jimenez said. 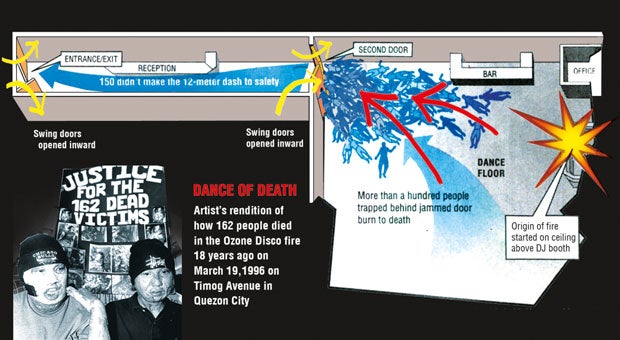 DANCE OF DEATH Artist’s rendition of how 162 people died in the Ozone Disco fire 18 years ago on Timog Avenue in Quezon City. (Inset) Two survivors—Renan Galang and Ryan Floresca—in a hearing at the Quezon City Regional Trial Court. JOAN BONDOC

Four other Westwood stockholders and directors—Racquel Ocampo, Rosita Ku, Sunny Ku and Alfredo Chua—were acquitted due to the failure of the prosecution to present enough evidence to convict them.

Of the seven Quezon City personnel found guilty of graft, only two are still connected with the local government.

Former building inspector Mamaid is still with the city engineering office, but is now the chief of road constructions. Engineer De Llamas is now with the legal division of the city Building Official.

Both were out of the office when the Inquirer sought them out on Thursday afternoon. Mamaid was on field work the entire day, according to his secretary, while the staff of the engineering office legal division said De Llamas had left early.

His secretary, however, told the media what the office knew of the fate of the others.

Former city engineer Rivera has gone into private practice, while former building inspector Reyes has been reassigned to another area.

These former and current city personnel were represented by a private counsel and not by the city legal office, according to City Administrator Aldrin Cuña.

“We have yet to see the order of the Sandiganbayan and we will see if there are instructions to the city from the court,” Cuña said.

He said he expected the two respondents, who are still with the local government, to appeal the decision.

In handing out the guilty verdict, the court took into consideration several irregularities in the application and approval of building and occupancy permits that the building officials had granted to Westwood.

“Notably, the pile of dead bodies found at the point of entrance/exit of the main dance floor remains a standing testament to the violation [by] Ozone Disco Club [of] the safety requirements on the provision of an exit door,” the court said in a 76-page resolution.

“The slapdash approval of the building permits and certificate of occupancy issued in favor of Westwood … marked by a lackadaisical screening of the paper requirements… marks the building officials’ evident bad faith and manifest partiality to the applicant,” it added.

The court said the fire showed that the building officials in conspiracy with the others accused ignored the provisions of the National Building Code.

It said the violations of laws pertaining to the construction of buildings “aggravated the death toll.”

During the trial, the court said it was found that the disco had a swing-in entrance door, a violation of the building code.

It also noted that the entrance door “also served as the exit door.”

“The supposed alternative exit, which was located at the VIP lounge, was actually obstructed by a sofa and an LPG (liquefied petroleum gas) tank, which only led to a fire wall,” the court said.

Citing the testimonies of prosecution witnesses, the court said Ocampo and Ng worked together to secure “unwarranted benefits, advantage or preference” from the former building officials.

“The audacity of Westwood… in the construction of Ozone Disco Club by evading compliance with important provisions of the National Building Code to suit its own business purposes is simply overwhelming,” the court said.

“There can never be a slapdash approval of a building permit and certificate of occupancy. To [shirk] from this duty will certainly run at risk all safety standards contemplated by the National Building Code,” it added.

The court said the former building officials acted “to condone, if not overlook, obvious violations of the National Building Code.”

“Had the violations been averted at the first instance, the magnitude of those who died and those who continue to endure scars that would haunt them for life, would not have happened,” the court said.

Asked why she appeared surprised by the court ruling, Celestino, who was 35 years old when her then 29-year-old brother passed away, said she was not made aware of a case related to Ozone that was filed in the Sandiganbayan.

She said what she knew was the class suit that she and the other victims’ relatives filed in the Quezon City Regional Trial Court right after the tragedy.

“I thought the case was dead already because after that and an appearance in (the Quezon City court), we did not hear anything anymore,” she said.

She said in the almost two decades that have passed since the tragedy, she and her family have carried on with their lives.

Celestino said she believed after all that things happened for a reason. “We never questioned God about what happened,” the now 54-year-old said.

She said that if she were to assess themselves, “Generally, we’ve done OK.”

In fact, she said she and her family had learnt to appreciate life more since the tragedy struck. “That’s what you learn from Ozone. You become more compassionate to people (as a result).”

But does she have the same compassion for the people she believed responsible for the death of her brother?

“They themselves should suffer. They should be in jail. The families of the victims have suffered enough,” she said. With a report from AFP

What Went Before: Ozone Disco is No. 6 in world’s deadliest nightclub fires