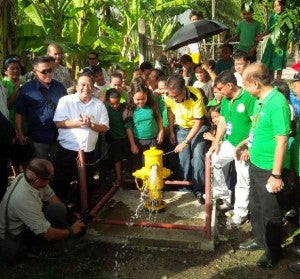 TAGBILARAN CITY – If Bohol Governor Edgar Chatto was pleased with the national government’s response after a magnitude-7.2 earthquake hit his province, one mayor ‎begs to disagree.

A month after Interior Secretary Manuel Roxas II reprimanded Bohol officials for failing to complete the project proposals for reconstruction, Mayor Leoncio Evasco of Maribojoc town ‎still thinks that poor coordination between the local and national government caused the delay in Bohol’s recovery.

In an ambush interview at Bohol Tropics Resorts minutes after Roxas met them, Evasco said at times, he was not satisfied with the national government’s response.

“You know people in Manila who have the penchant in making deadlines and policies connected to the LGUs (local government units) without first consulting us, that makes the delay,” he said.

“In most cases, these guidelines (from the national government) do not correspond‎ to the conditions of the prevailing reality‎.”

But according to Chatto, most of the mayors did not take Roxas’ remarks as dressing down.

“We’re very thankful that Secretary Mar came. They took it as his role as a father of ‎the family to know what problems really exist,” Chatto said. ‎

On October 15 during the first anniversary ‎of the killer earthquake, Roxas went to Tagbilaran City to get updates on the rehabilitation plans of local officials.  ‎

It may be recalled that Evasco hurled an expletive at Roxas in an interview with local reporters while pointing out ‎that the secretary should have scolded himself for the delays.

The delay Evasco was referring to was the relaying of Bohol Earthquake Assistance (BEA) guidelines from the Department of the Interior and Local Government to the mayors.

According to the official, mayors could not come up with Programs of Works and Estimates (POWE) without getting the guidelines‎ first.

The POWE is a document required from the LGUs before repairs in government infrastructures, such as public markets, municipal and city halls, could be done.

“We are not asking to work totally on our own. But the money comes from the national government. Whoever holds the purse, dictates,” Evasco added.
‎He said he wishes to have more time to sit down with the secretaries to speed up their planning.