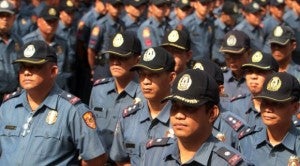 MANILA, Philippines – A bit of Yuletide cheer will be coming the way of our country’s lawmen this weekend.

The Philippine National Police has allocated P1.8 billion for the yearend bonus of its personnel, which policemen will receive by Friday (Nov. 21).

The PNP directorate for comptrollership has released P1,837,449,867.23 through the PNP finance service, for the bonuses of 150,000 active duty personnel.

Chief Supt. Felixberto Lagiwid said the bonus would be credited to the individual payroll accounts of active-duty uniformed and non-uniformed personnel.

“This is consistent with the earlier announcement by Malacañang on the release this week of yearend bonuses for government workers,” he said on Thursday.

PNP personnel who are not yet enrolled in the ATM payroll system will receive their checks through the Regional Finance Service Offices.

The year-end bonus is half of the 13th-month pay and other cash benefits mandated by law for all government workers.

The release of the year-end bonus will coincide with the 55th birthday of PNP Dir. Gen. Alan Purisima on Friday.

Lagiwid said the first tranche of the 13th month pay for this year was released in May 2014.