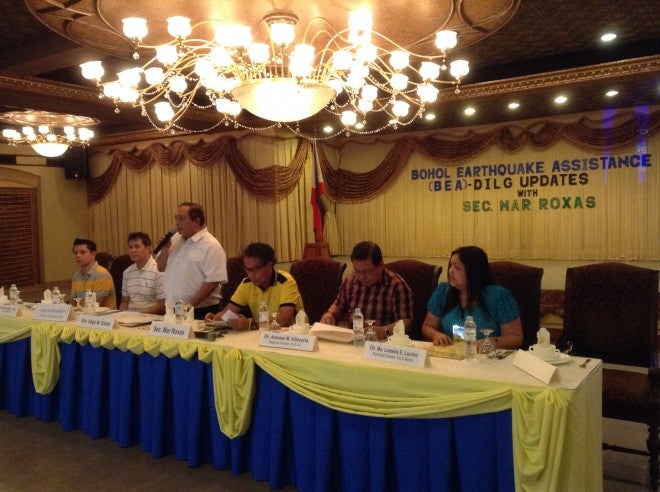 TAGBILARAN CITY, Philippines — Thirty-three engineers were sent by the government in Bohol to help speed up the rehabilitation of earthquake-damaged structures a month after Local Government Secretary Mar Roxas scolded the province’s mayors for their delayed actions.

Technical engineers the Department of Interior and Local Government and the Department of Public Works and Highways hired ‎came in batches to Bohol a month after Roxas’ meeting with local officials last October.

In a meeting with mayors at Bohol Tropics Hotel on Thursday, Roxas said their duty is to check the “engineering calculations” of each Program of Works and Estimates (POWE) to ensure the structural integrity of buildings to be repaired.

Exactly a year after a destructive earthquake struck Bohol on October 15, town mayors got a dressing down from Roxas for failing to submit 1,064 POWEs needed for the repair of public infrastructures here.  ‎

The POWE is a proposal containing estimated cost of materials and the project. It is needed before a project undergoes bidding until its implementation.

The funds allotted for the POWEs will be covered by the P2.4-billion ‎Bohol Earthquake Assistance (BEA) from the DILG.

But after the October meeting, Maribojoc Mayor Leoncio Evasco hit back at Roxas, saying the DILG Secretary should have scolded himself for failing to release immediately the BEA guidelines.

According to Evasco, the mayors‎ were not able to submit their ‎POWE as they are required to follow the guidelines from the DILG.

It was only on August 1 when the guidelines were given to the mayors. Roxas and Budget Secretary Florencio Abad turned over to Bohol Governor Edgar Chatto ‎the P2.4-billion budget in June.

Roxas lauded this time the local officials as the number of POWEs they submitted “increased times 10.”

(We do not want hidden cracks in the buildings’ foundation.)

In an interview, Chatto said more programs of work have been submitted by the mayors since Roxas checked on them two months ago.

“You will see how it progressed from the last meeting up to the present. I think this is the strongest indicator of the impact of bringing technical engineers here because POWEs have increased,” Chatto said.

From 300, POWEs submitted increased to 612 since the October 15 meeting.

As of Wednesday, 260 of the 612 POWEs have been approved by the DILG.‎