Bongbong calls for end of feud between Aquino and Marcos families 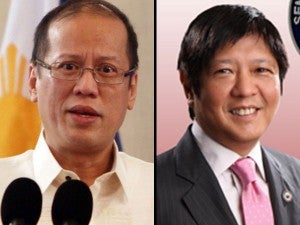 MANILA, Philippines — It is high time to put an end to the decades-old   feud between the Aquino and Marcos families, Senator Ferdinand “Bongbong” Marcos Jr. said on Thursday.

Marcos issued the statement when asked over radio DWIZ about the possibility of the two families reconciling.

“That’s something that would be good for the country. Kasi alam naman natin itong away na ito na hanggang ngayon ay tuluy-tuloy pa. Ito’y sagabal sa pagkakaisa dito sa bansa. Kailangan we have to get past it…put it behind us. Ang daming kailangang gawin,” he said.

(That’s something that would be good for the country. We all know that this feud continues up to now. This prevents us from uniting the country. We have to get past it…put it behind us. There are so many things we need to do.)

(I mean, for the Marcos family, this political feud is already over. It’s not personal. It was only my father and Ninoy Aquino who fought in the ‘60s and ‘70s so we should get past it already and stop making an issue out of it. We won’t gain anything from continuing to revive the Aquino-Marcos feud for no reason. We’ll get nothing out of that.)

The senator was referring to Senator Beningo Aquino Jr., who was assassinated upon his return to Manila in August 1983 from a three-year self-imposed exile in the United States. His death sparked national outrage, which resulted in the first People Power revolt in 1986 and the eventual ouster of then President Ferdinand Marcos.

But Senator Marcos said it was already in the past, which should not always be revived.

“We have to unify the country and the country to be unified has to move forward,” he said.

Can Aquinos, Marcoses reconcile? It’s not that simple, Palace says