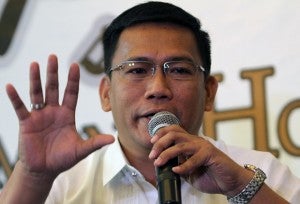 MANILA, Philippines–The Department of Justice (DOJ) has pieces of evidence strong enough to pin acting Health Secretary Janette Garin and other politicians allegedly involved in the misuse of P5 billion from the funds of the defunct National Agribusiness Corp. (Nabcor), the lawyer of the scam’s whistle-blowers said on Wednesday.

“I don’t believe that there is any lack of documents or evidence. In fact, we submitted strong evidence along with the complaint,” he told reporters.

Baligod issued the clarification following Justice Secretary Leila de Lima’s recent pronouncements that the National Bureau of Investigation’s probe of the scam was stalled due to incomplete documents submitted by the witnesses.

De Lima added that the affidavits of Mendoza and Cacal were not duly subscribed and that investigators were still awaiting additional documents from the two.

Baligod countered the justice secretary’s statements, saying, “Even the ledger containing the bank accounts where the commissions were deposited was annexed to the complaint.”

“What we knew was that after two months from the filing of the complaint, the DOJ transmitted our complaint to the Office of the Ombudsman without any investigation. We were told it was the Ombudsman that would conduct the factual investigation,” he added.

Baligod said the whistle-blowers remained ready to cooperate with the NBI once it resumed the investigation.

“We’ve been waiting for several months already for any investigation since we filed the complaint last March,” he said.

The PDAF racket also involved Nabcor but the P5-billion scam exposed by Cacal and Mendoza did not involve the PDAF. Part of the scam was the alleged misuse of P300 million from the Department of Agriculture’s Ginintuang Masaganang Ani (GMA) program.

The whistle-blowers claimed that about P100 million from the GMA program, reported as spent by Nabcor for “technical studies,” went to the campaign kitties of politicians running in the 2007 elections, among them then Iloilo Representative Garin and eight other politicians.

Garin, who was named health undersecretary in 2013, has repeatedly stated that she was not involved in the scam and had no contact with Nabcor or anybody from the state-owned firm.

Baligod used to be the lawyer of some PDAF scam whistle-blowers, including Benhur Luy and Merlina Suñas.

In March, Luy, the primary witness, dismissed Baligod allegedly over the lawyer’s prioritization of his “other advocacies.”