Church execs say visit of Pope is to archdiocese 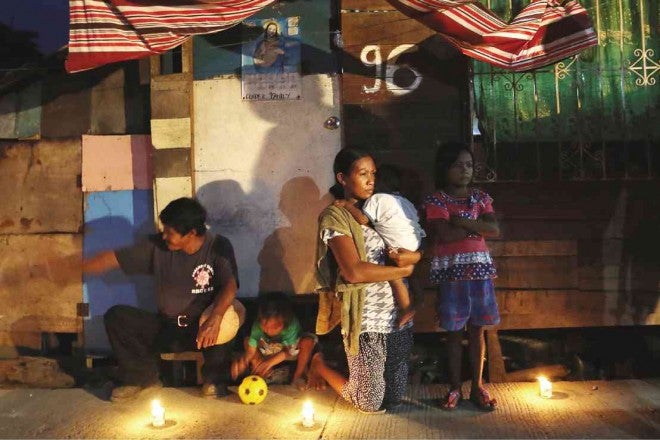 SURVIVORS take part in Mass celebrated in commemoration of the first anniversary of Supertyphoon “Yolanda” in Tacloban City, which is included in the itinerary of Pope Francis during his visit to the Philippines in January. RAFFY LERMA

The visit by Pope Francis to Tacloban City and this town should be labelled as a visit to the Archdiocese of Palo instead of simply just a visit to the city and the town, according to Fr. Chris Arthur Militante, information and social communications officer of the archdiocese.

Tacloban City is the capital of Leyte province and the regional center of Eastern Visayas, while Palo town is the seat of the archdiocese.

The archdiocese covers Leyte with the dioceses of Calbayog, Borongan, Naval and Catarman as jurisdiction or suffragans.

The remaining diocese of Maasin in Maasin, Southern Leyte belongs to the archdiocese of Cebu.

“His coming next year is not only for Tacloban or Palo but for the entire archdiocese of Palo,” Militante said.

Francis is scheduled to arrive in Tacloban on Jan. 17, where he will celebrate Mass at the Daniel Z. Romualdez Airport at 10 a.m, according to his itinerary released by the Vatican last week.

After the almost two-hour Mass, the Pope will motor his way to Palo town where he would meet survivors of Supertyphoon “Yolanda” at the archbishop’s palace, also known as the Gonzagahaus, and inaugurate the Pope Francis Center for the Poor.

Officials of the archdiocese declined to comment if the labeling has something to do with the political situation in the two areas to be visited by the Pope which took the brunt of Yolanda’s wrath.

The mayor of Tacloban City, Alfred Romualdez, and the mayor of Palo town, Remedios Petilla, are bitter political rivals.

Petilla is the mother of incumbent governor, Leopoldo Dominico and Energy Secretary Carlos Jericho, who had been Leyte governor for nine years.

Romualdez is the nephew of former first lady and now Ilocos Norte Rep. Imelda Marcos whose family, in turn, is considered the political rival of the family of President Aquino.

About people, not politicians

Palo Archbishop John Du said Francis’ visit is about the people, not about politicians.

“Let us prepare for this together, without bickering and without undermining each other’s participation,” said Du.

Even if Aklan is not part of the Pope’s itinerary, devotees would celebrate his visit which would coincide with this year’s of the Kalibo Ati-Atihan, a religious feast that had become one of the country’s most popular festivals.

Rather than moving the celebration of Ati-Atihan to another date, organizers have integrated the papal visit in the celebration, according to Albert Menez, chair of the Kalibo Sto. Niño Festival Foundation Inc. (Kasafi).