MANILA, Philippines–A condominium unit at The Peak in Makati City belonged to Ernesto Mercado—not Vice President Jejomar Binay—and was the scene of the 2002 gun slaying of the former vice mayor’s girlfriend.

Mercado was a prime suspect in the killing, according to the Binay camp.

Remulla dismissed allegations that Binay used dummies to cover up his ownership of the condo units as “bare-faced lies, mere allegations unsupported as usual by evidence.”

He sought to turn the tables on Mercado, insisting that Binay’s former vice mayor was in fact the “real owner” of the blood-stained unit at The Peak.

Remulla said Mercado’s former live-in partner, Racquel Ambrosio, a daughter of the late comedian Babalu, lived in this unit until her fatal shooting there on April 24, 2002. 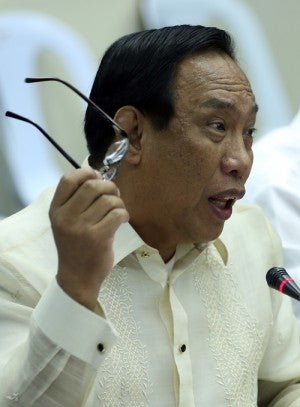 A condominium unit at The Peak in Makati City belonged to Ernesto Mercado (pictured)—not Vice President Jejomar Binay—says Binay’s spokesman, Cavite Gov. Jonvic Remulla. Mercado, however, maintains that the unit on the 28th floor of The Peak condominium is not his. INQUIRER PHOTO / NINO JESUS ORBETA

He said that Mercado was considered a “prime suspect” in the killing of Ambrosio, who was shot in the stomach.

“The gun used in the shooting was registered to Mercado. He surrendered the gun after the incident and even admitted to cleaning the crime scene,” Remulla said, adding that the couple had an “altercation” before the shooting incident.

Asked about the allegation, Mercado said police authorities had cleared him in Ambrosio’s death after paraffin tests showed he was negative for gun powder burns. “It was ruled as a suicide by police based on witnesses and evidence,” he told the Inquirer.

In fact, Mercado said the gun was registered to Ambrosio.

He also said that his 12-year-old son with Ambrosio is now under his custody.

Mercado testified in Tuesday’s hearing of the Senate blue ribbon subcommittee that Ariel Olivar, an engineer, acquired The Peak unit for Binay.

But Remulla claimed Olivar was “known to be a dummy” of Mercado.

“We challenge Mr. Olivar to divulge all properties under his name,” Remulla said.

He said Olivar was a passenger on the chartered helicopter that took aerial photos and videos of the Batangas property on Oct. 2 that was made public in the Senate hearings as evidence of Binay’s corruption and ill-gotten wealth. Called “Hacienda Binay,” Mercado claimed the Vice President acquired the property using dummies as well.

“It is only too clear that Mercado’s agenda is to fool the public and cover up his ownership of many undeclared properties,” Remulla said.

He also said that Mercado was behind allegations against Binay that turned out to be false. This included his claim Binay owned a log cabin in Tagaytay Highlands and that the Batangas property came with a piggery that had air conditioners.

Mercado maintained that the unit on the 28th floor of The Peak condominium was not his and Ariel Olivar was not his dummy.

“It’s not mine, why would I expose it when it could get back to me, if it’s mine, I just don’t see the logic,” Mercado said.–With a report from Nancy C. Carvajal

Only Ayalas didn’t give Binay condos–Mercado