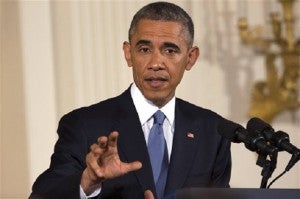 BRISBANE, Australia — President Barack Obama says the threat of a government shutdown by Republicans doesn’t affect the timing of his executive action on immigration.

He says the main factor is getting it right. He says any action he takes will require changes to how the Homeland Security Department operates.

Obama is considering acting on his own as early as this week to possibly shield up to 5 million immigrants now living illegally in the U.S. from deportation.

Obama said at a news conference Sunday he understands some Republicans disagree there’s a need to fix immigration laws. But he says shutting down the government over the issue makes as little sense as if he were to shut down the government in objection to GOP votes to repeal his health care law.