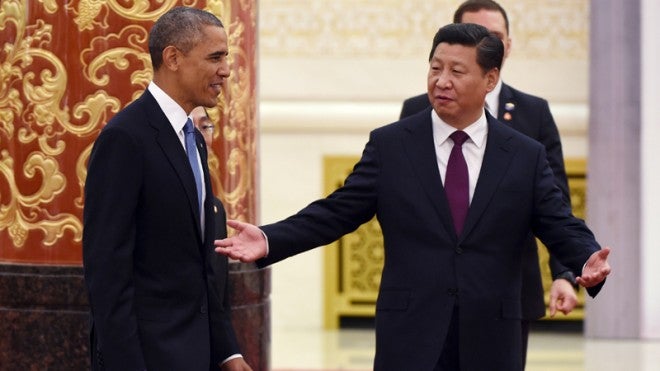 Chinese President Xi Jinping, right, gestures to U.S. President Barack Obama as they arrive at a lunch banquet in the Great Hall of the People in Beijing Wednesday, Nov. 12, 2014. Obama is on a state visit after attending the Asia-Pacific Economic Cooperation summit in Beijing. (AP Photo/Greg Baker, Pool)

WASHINGTON — Don’t expect the landmark U.S.-China climate change agreement to nudge the world’s rising thermostat downward much on its own, scientists say.

While they hail it as a start, experts who study heat-trapping carbon dioxide don’t see the deal, announced Wednesday in Beijing, making significant progress without other countries joining in.

The math shows that even with the agreement, the globe is still rushing toward another 2-degree temperature rise — a level that world leaders have pledged to avoid as too dangerous.

China, the world’s No. 1 polluter, will still increase its emissions until 2030 or so, under the agreement. The U.S., which ranks second, promised to cut pollution from the burning of coal, oil and gas to levels that haven’t been seen since 1969. But whatever cuts the U.S. makes will be swamped by the Chinese growth in pollution over the next 15 years.

“It doesn’t change things much,” said Glen Peters, a Norwegian scientist who was part of the Global Carbon Project international team of researchers that tracks and calculates global emissions every year.

“This is not far off the business as usual” scenario the world is already on, he said.

In 2009, countries across the globe set a goal of limiting global warming to about another 2 degrees Fahrenheit (1 degree Celsius) above current levels. Peters’ team calculated earlier this fall that the world would hit that mark around 2040 and the U.S.-China accord doesn’t change that, he said.

The numbers are just too big, especially out of China.

MIT professor John Sterman, who runs computer simulations of global emissions, compared the numbers to a driver with his foot all the way down on the accelerator in the fog heading toward a cliff. While this agreement helps, it’s only letting up on the pedal, not slowing the car.

“It doesn’t buy a lot of time for when we blast through the 2-degree level,” Sterman said.

It may help in the long run when emission cuts pile up, he said, “but by then you’ve locked in sea-level rise, you’ve locked in more extreme weather, water shortages and declines in agricultural output.”

World leaders forged the first international treaty to combat global warming in Kyoto, Japan, in 1997. But developing countries, including China and India, were not required to reduce greenhouse gas emissions and that caused a big rift. The United States signed the agreement, but did not ratify or honor it.

After only non-binding goals were adopted in 2009 in Copenhagen and a U.N. summit earlier this year, international leaders are now aiming to forge a follow-up agreement in Paris in late 2015.

After Wednesday’s announcement, Climate Interactive, a group that makes projections on emissions, ran simulations that showed the new agreement will mean about 700 billion tons (639 billion metric tons) of carbon dioxide will be kept out of the air by 2100, reducing expected cumulative carbon pollution by about 8 percent.

In the agreement, China, whose emissions are rising as it builds new coal plants to fuel its economic growth, set a target for its emissions to peak in 2030 or earlier. That’s the first time China has set a deadline for stopping its emissions growth. China also said it would increase the share of clean energy sources like wind and solar power to 20 percent by 2030, about double what it is today.

It’s not clear how high China’s emissions will go until the 2030 peak. But using recent growth rates and simple math, Peters calculated that China’s annual carbon emissions could grow by as much as 5 billion tons, to 16 billion tons over that period.

In contrast, U.S. emissions will only go down about 1.2 billion tons by 2025 as a result of President Barack Obama’s pledge to reduce carbon pollution 26 to 28 percent below 2005 levels. U.S. emissions peaked at 6.4 billion tons in 2007, then started falling in part because of the economy and a switch from coal to cheaper natural gas before jumping up again last year.

“We need to solve this problem together because neither one of us can solve it alone,” U.S. Secretary of State John Kerry wrote in an op-ed for The New York Times on Wednesday. “Even if the United States somehow eliminated all of our domestic greenhouse gas emissions, it still wouldn’t be enough to counteract the carbon pollution coming from China and the rest of the world. Likewise, even if China went down to zero emissions, it wouldn’t make enough of a difference if the United States and the rest of the world didn’t change direction.”

Still, the U.S.-China agreement, even when combined with pledges already on the table from other nations, including the European Union, — which earlier committed to cuts — that’s only half of the world’s carbon dioxide emissions. Much of the rest of the emissions are coming from the developing world, which are likely to see their carbon pollution soar, said Henry Jacoby, also of MIT.

Mathematically “it may not blow you down, but it is an important political development,” Jacoby said.