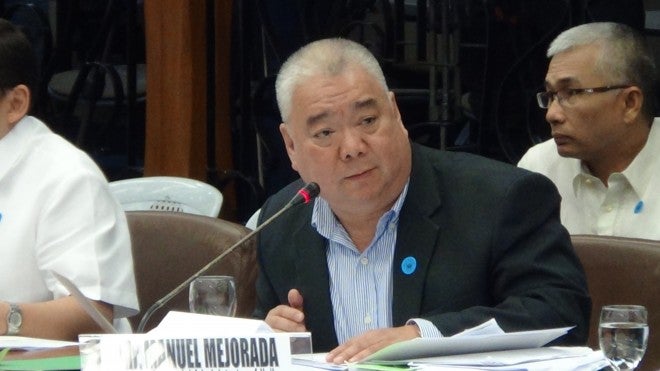 MANILA, Philippines–More senators turned up on Thursday at the Senate inquiry into the controversial Iloilo Convention Center (ICC) and sounded more genial to the guests.

In a hearing that was replete with references to the Makati City Hall Building II, senators gave Manuel Mejorada all the time to air his allegations of corruption against Senate President Franklin Drilon, proponent of the ICC project, without interrupting him.

When Sen. Antonio Trillanes IV confronted Mejorada over his claims that the P700-million ICC was overpriced, he sounded very gentle.

It was Mejorada who filed a plunder complaint against Drilon in the Office of the Ombudsman for the alleged ICC overprice.

At one hearing, under tough grilling by Cayetano, businessman Antonio Tiu complained that he was being treated like an accused.

At Thursday’s hearing on ICC, the resource persons as well as the senators could not help but make references to the allegedly overpriced P2.28-billion car park.

The reason: Both the first phase of ICC and the Makati car park have the same contractor, Hilmarc’s Construction Corp.

After two failed bidding exercises, Hilmarc’s submitted the lowest bid in a negotiated procurement, P479 million, after “value reengineering” to reduce the cost of the project, Singson said.

And precisely because of this, the contract was awarded to Hilmarc’s, he said.

“We’re happy with their performance,” Singson said in an interview after the hearing. “We can defend their numbers, we can defend what they’ve done.”

In the Makati car park hearings, Hilmarc’s was derided as the favored contractor of the Makati city government, under the Binays.

Hilmarc’s also drew praises from Trillanes over its performance in the ICC project.

“We can see here that the problem here is the Makati officials,” he said.

Sen. Teofisto Guingona III said the fact that senators were able to ask the Senate President questions showed that the blue ribbon committee hearing on the alleged overpricing of ICC was transparent.

Amid observations that the hearing on the pet project of Drilon was friendly or was intended to clear Drilon, Guingona said the people could judge for themselves how the hearing went since it was a public proceeding.

But he pointed out that Drilon, who had inhibited himself from the hearing, sat as resource person in the hearing and took questions from colleagues, including opposition Sen. Nancy Binay.

He said he had not seen a similar instance in the past.

“Where else have you seen an exchange, a question and answer between the Senate President and a senator? That goes to show the process is very transparent. There is nothing secret here and we bring everything out,” he told reporters.

Sen. Nancy Binay was the lone opposition senator who attended the hearing. Aside from the funding source, she sought details on the audit of the project and on the donation of the land for ICC.

Binay has been critical of the blue ribbon subcommittee investigation of alleged irregularities in Makati City where her father, the Vice President, and brother, Makati Mayor Jejomar Erwin Binay, have been implicated. She has inhibited herself from the subcommittee hearings.

Drilon criticized Mejorada, his former employee, for supposedly making assertions without any proof.

Guingona said he had given all invited resource persons the chance to present their explanations and to respond to any statements or questions directed at them.

“You’ve seen that we’ve treated everybody equally and with the proper respect. Everybody got the chance to speak,” he said.

Guingona added that he would allow another Drilon critic, former Iloilo Rep. Augusto Syjuco, to speak at the next hearing on the ICC issue.

But he also said he would rather focus first on the ICC issue.