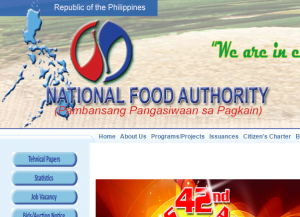 MANILA, Philippines—The National Food Authority (NFA) has a new administrator, Renan B. Dalisay, who was chief of food security czar Francis Pangilinan’s staff when the latter was a senator.

Pangilinan, presidential assistant on food security and agricultural modernization, said on Thursday Dalisay was most recently his “special assistant for NFA concerns” before President Aquino appointed him to the NFA Council.

“I trust Renan Dalisay to serve with integrity and skill as he did for 12 years in the Senate,” Pangilinan said in a statement.

“What we need in NFA is somebody who can make things happen and implement the clear directions, policies and reform agenda that the NFA Council and [my office] have set,” he added.

The NFA is one of the four agricultural agencies that were placed under Pangilinan’s authority when President Aquino appointed him last May.

Dalisay replaces Efren J. Sabong, who has been sitting as NFA officer-in-charge since Oct. 2 following the resignation of Arthur Juan.

Juan’s resignation in late September came after he was accused of trying to extort P15 million from a rice trader whose warehouse was padlocked following a raid by a team led by the police.