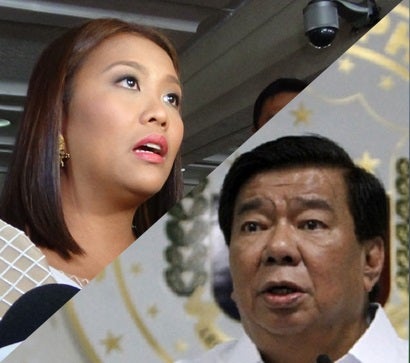 MANILA, Philippines – Tension sliced through the Senate session hall Thursday when Senate President Franklin Drilon and Senator Nancy Binay faced off during a hearing on Thursday over the alleged overpriced construction of the Iloilo Convention Center (ICC).

The overpricing allegation was the same issue raised against Binay’s father, Vice President Jejomar Binay in connection with the construction of the Makati City Hall 2 parking building.

It started when Binay was asking Public Works Secretary Rogelio Singson over the source of funding used for the project, particularly the P100 million that came from the Department of Public Works and Highways (DPWH), which he heads.

“Saan ho galing ang pondong ito?” Binay asked to which Singson said was a request to Department of Budget and Management.

Binay then asked if it was Singson, who requested the budget from the DBM to which the DPWH answered in the affirmative.

But when the lady senator again asked if there was any legislator who endorsed the budget for the project, Drilon butted in and said: “Why doesn’t my colleague ask me what my role in funding here..? Don’t beat around the bush.”

Feeling the tension, Senator Teofisto Guingona III, chairman of the committee, decided to suspend the hearing. And when it resumed, Guingona told the committee that Binay would directly question the Senate leader.

“Did you request funding for this project?” Binay asked Drilon, an ally of President Benigno Aquino III and partymate in the Liberal Party.

It was also possible, he said, that the funding could have come from the Disbursement Acceleration Program (DAP).

“It could have come from DAP, yes, yes it could have come from DAP. What’s important is that at that time that there was DAP, there’s a presumption of legality because it has not been declared unconstitutional at that point and in this particular case, what’s important is meron ho bang ninakaw na pera dito? DAP man o pork barrel man, may ebidensya ba na may kumita dito? E tatlong oras na tayong nagme-meeting dito wala pa kayong naririnig kung paano po ninakaw ang pera dito…” Drilon said, still responding to Binay’s queries.

And when Binay directed again the same question on funding to Singson, Drilon again cut her off, saying: “Ako na nga ang nagsabi that I requested for funding…”