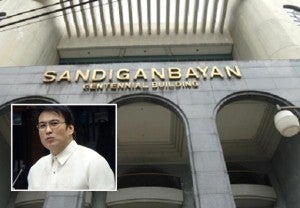 State prosecutors made their formal offer of evidence during Revilla’s bail hearing.

The anti-graft court first division admitted as evidence the Commission on Audit special report on the Priority Development Assistance Funds (PDAF) transactions, the sworn affidavits of whistleblowers, the special allotment release orders (Saro) for the PDAF releases, and, more importantly, the hard disk drive of principal whistleblower Benhur Luy that contained the daily transactions with lawmakers and their respective kickbacks.

Other pieces of evidence admitted by the court were memoranda of agreements (MOAs) between the lawmaker and the implementing agencies, Revilla’s endorsement letters for the bogus non-government organizations, and project listings.

The court has also admitted the report of the Anti-Money Laundering Council on Revilla’s bank accounts, which were said to have contained unexplained wealth believed to be Revilla’s kickbacks in the scam.

The Benhur Luy files saved in the hard drive were said to be copied from accused mastermind Janet Lim-Napoles’ computer by Luy before he had a falling out with Napoles.

Luy, Napoles’ entrusted finance officer, turned his back on Napoles after she allegedly detained and accused him of starting his own pork barrel scam.

The prosecutors offered as evidence the image copies of the hard drive despite objections by the defense that the contents might have been tampered with.

The court, however, did not admit Luy’s disbursement reports from 2011 to 2012 because these were made outside the material date of the case information.

Revilla’s lawyer Joel Bodegon lamented the admission to evidence of Luy’s files, saying even the forensic expert who testified against Revilla admitted that some files were deleted from the hard drive.

“The National Bureau of Investigation did not even examine the iMac. There’s a problem of authenticity whether the said documents were faithful reproduction of the files in the iMac computer,” Bodegon said.

Revilla’s lawyer said they would field their own witness — a handwriting expert — this afternoon to question the signatures of Revilla affixed to endorsement letters, memoranda and other documents.

State prosecutor Joefferson Torribio, however, said they were confident, especially after the court admitted as evidence Luy’s testimony and the hard drive, which were among their strongest evidence against Revilla’s bail motion.