Drilon: If Syjuco can prove it, he can have the mansion | Inquirer News
Close
menu
search

Drilon: If Syjuco can prove it, he can have the mansion 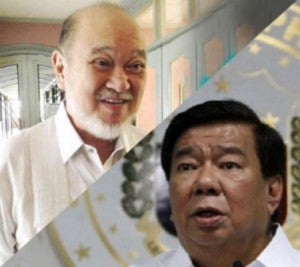 MANILA, Philippines—If former Iloilo Representative Augusto Syjuco Jr. can prove that Senate President Franklin Drilon has a mansion in Forbes Park, then “he can have it,” Drilon’s chief of staff said.

Lawyer Renato N. Bantug Jr. issued the challenge in response to Syjuco’s  allegation that the Senate leader’s  stepdaughter, Eduarda Genuino, owned  a 1, 542-square-meter mansion worth P50 million in Forbes Park, an enclave for the rich in Makati City.

“Syjuco’s allegations have long been debunked, they are old lies that Syjuco has been peddling again and again. Syjuco is fond of calling attention to himself. It is obvious he is rehashing old fabrications to get a piece of the spotlight,” Bantug said in a text message sent to inquirer.net  through staff member in Drilon’s office.

“If Syjuco can definitely prove that Senator Drilon owns a mansion in Forbes Park, he can have it,” he said.

The alleged property was  only one of the  allegations  enumerated  by the former lawmaker against Drilon in an  open letter  he sent to senators ahead of Thursday’s  investigation into the allegedly overpriced Iloilo Convention  Center (ICC),  a which was  the Senate leader’s pet project.

“Miss Genuino, aged only in her 20s at that time, is a stepdaughter of Senator Franklin Drilon. She was a simple wage earner then, and could not on her own produce that amount of money. Did her job pay her enough for her to purchase a P50-million Forbes Park house?” Syjuco said.

“When she acquired this property, she was single and she listed as her address the house of Drilon at 49 Polk Street, North Greenhills, San Juan Metro Manila,” he added.

But  instead of fabricating stories,  Bantug  said Syjuco  should  just face and  answer the  serious charges  lodged against him  when  he was still the head of the  Technical Education and Skills Development Authority (Tesda).

“Syjuco, who is out on bail, having been the subject of various graft cases filed by the Office of the Ombudsman in the Sandiganbayan, should instead face and answer the serious charges against him in connection with anomalous transactions and overpricing of equipment during his stint at Tesda,” Drilon’s lawyer said.