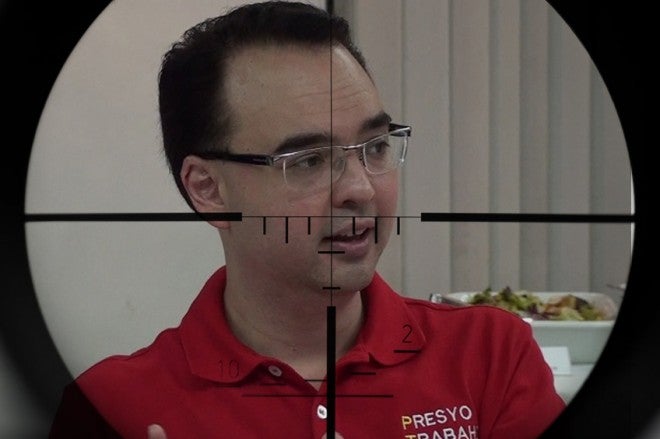 MANILA, Philippines–Sen. Alan Peter Cayetano on Wednesday night said he was taking a death threat seriously, but would not be distracted from the Senate inquiry into corruption charges against Vice President Jejomar Binay.

“You’re human, and it affects you, and the people around you,” Cayetano said in a telephone interview.

A man called the trunkline of his Senate office around 5 p.m. and uttered a threat: “Tell Senator Alan that if he doesn’t keep quiet, a single bullet will silence him.”

His staff reported the threat to the Senate sergeant at arms, and Senate police.

Cayetano said he would take precautionary measures, such as limiting his daily movements, and considered asking for additional security from the Office of the Senate Sergeant at Arms.

But he said the threat would not sidetrack him from the inquiry by a Senate blue ribbon subcommittee into allegations of corruption and ill-gotten wealth against the Vice President, he said.

“It’s ironic that we’ve been seeking answers and now we’re being threatened to shut up. Senator Trillanes and I have agreed that we will be quiet once they start to seriously answer allegations,” he said.

Cayetano, along with Senators Antonio Trillanes IV and Aquilino Pimentel III, has been at the forefront of the investigation into allegations of corruption and ill-gotten wealth against Binay.

For the past several weeks, the subcommittee has heard testimony that Binay pocketed kickbacks from infrastructure deals awarded to favored contractors in Makati during his term as the city’s mayor, and owned a P1.2-billion agricultural estate in Rosario town, Batangas province.

Hurt by the allegations, Binay asked President Aquino to talk the senators into halting the inquiry, but was rebuffed.

Cayetano declined to say who was behind the threat.

“It’s hard to speculate. But having said that, we’ve known that they have used every issue to distract the public,” he said, referring to Binay’s camp.

Binay has rejected an invitation by the blue ribbon committee and subcommittee to respond to the allegations against him. Through his spokespersons, however, he has issued statements denying the charges.–TJ Burgonio and Leila Salaverria

‘A bullet to silence Alan Cayetano’