MANILA, Philippines—Energy Secretary Jericho Petilla on Wednesday downplayed criticisms about the government’s supposed conflicting figures on the power shortage situation during the dry season of 2015.

During the Joint Congressional Power Commission (JCPC) hearing at the House of Representatives, Petilla vowed to reconcile the two power outlooks of the Department of Energy (DOE) and the National Grid Corporation of the Philippines (NGCP). 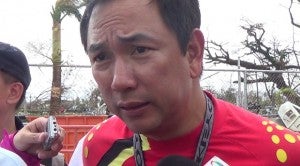 “The problem is you’re looking at two outlooks with different assumptions. I suggest we look at one particular outlook. We make an assurance that the NGCP and DOE are actually talking because we are,” Petilla said.

Petilla explained the outlooks do not match because the NGCP does not account for the forced power outage, while the DOE includes forced power outage and additional capacity.
“Historically, the NGCP never puts forced outage because they never make projections that could anger the independent power producers,” Petilla said.

He said the situation might be to compel the NGCP to include the forced outage in their computations.

“If that is the only problem that you have, I’ll just have to tell the NGCP to put in the forced outages,” Petilla said.

“If you look at NGCP numbers, everything is rosy for as long as there is no forced outage. But forced outage is a fact of life in the grid,” he added.
Petilla made the statement after lawmakers – who were being requested to speed up the passage of the joint resolution authorizing the President emergency powers to contract additional power – hit energy officials for failing to reconcile the figures.

“I cannot rely on conflicting numbers which are not solid that will disable me from convincing a majority of members of the House,” said Oriental Mindoro Reynaldo Umali, energy committee chair and co-chair of the JCPC.
“We don’t want another debate that the NGCP is saying this and DOE is saying that… Please come back to us with a clear set of common figures, whether with forced outages or dispatchable reserves,” Deputy Speaker Batanes Rep. Henedina Abad also said.
Umali asked DOE and NGCP to submit their reconciled figures tomorrow, Thursday, so the committee could submit the joint resolution that day.

He said they are eyeing to pass the joint resolution on third and final reading by the end of November.

According to the lower chamber’s draft resolution on the President’s emergency powers, “additional generating capacity shall be preferentially sourced from the Interruptible Load Program (ILP), fast tracking of committed projects, and plants for interconnection.”

The ILP is seen by the House energy committee as the preferential solution to the anticipated power shortage supposedly due to the looming El Nino phenomenon, the maintenance shutdown of the Malampaya power plan, increased or continuing outages of power plants, and the delay in commissioning of committed power projects.

The provision and procurement of additional generation capacity will be available on or before March 1, 2015, the resolution said

The draft resolution also cited an adoption and execution of energy efficiency and conservation measures as a “fallback mechanism.”
According to the resolution, private entities with self-generating facilities are encouraged to participate voluntarily in the ILP on or before December 2014 to stimulate additional generation capacities

Government is also expected to reimburse the business owners of these generators for fuel expenses and “reasonable recover for their use,” the resolution said, adding that the reimbursement will not be subject to value-added tax.

Those businesses which have not registered under the ILP may also be manually deloaded from the grid without compensation “to meet the exigencies of the power shortage,” the resolution added.