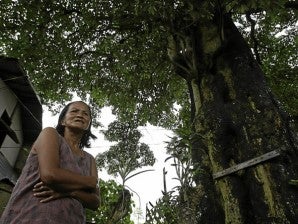 Edna Alfonso, 45, stands by the dita tree that saved the life of her family members and neighbors from rampaging floodwaters spawned by Ondoy last Sept. 26, 2009. Thirty seven persons took shelter on the limbs of the 40-foot tree in Bagong Silang village, Quezon City. LYN RILLON/INQUIRER PHOTO

A leafy “devil” in Edna Alfonso’s backyard will henceforth be called a “tree of life.”

The 13-meter (40-foot) presence at Bagong Silangan village in Quezon City was an unexpected unsung hero and lifesaver during the onslaught of Tropical Storm “Ondoy” on Sept. 26, 2009.

The 45-year-old Alfonso and five of her children, along with other residents, held on to the tree and hung on for 10 hours as Ondoy dumped a record amount of rainfall and sent floods rampaging through the area.

Alfonso’s partner, Jerry dela Cruz, 48, had strung together used rubber tires to transport the family from the roof of their two-story house to the tree’s branches.

A shy Dela Cruz also helped his neighbors to the safety of the tree.

To protect themselves from the cold, they huddled together on the branches, trying to keep warm from noon to midnight, worrying that the children would fall asleep and tumble into the raging water below.

“I kept calling my sons’ names because I wanted to make sure that they were awake. They might fall off if they give in to drowsiness,” Alfonso told the Inquirer. “No one was crying. No one even engaged in idle chat to while the time away. We were all praying for the rain to stop so we could get down from the tree.”

Ondoy dumped a record 341 millimeters of rain over six hours, leaving at least 465 people dead in a flooding that devastated large areas of Metro Manila and parts of central and southern Luzon.

Alfonso’s savior is the tree locals called “dita.” It is also called the “devil tree” because residents say it shelters evil spirts. Its botanical name is Alstonia scholaris and is reportedly native in India and Southeast Asia.

According to village public safety officer Eddie Clave, floodwaters in the poverty-stricken community reached nearly 7 meters (20 feet) at the height of Ondoy’s drenching.

Alfonso’s neighbors used a rope as a safety line to the tree, which saved 37 residents of the submerged Sitio (sub-village) Binhi ni Abraham at Bagong Silangan.

Councilor Alfred Vargas of Quezon City’s second district is set to erect a marker at the foot of the tree on Ondoy’s second anniversary on Monday.

Vargas, an actor, recently filed a resolution to recognize the tree and call it “puno ng buhay” or “tree of life.” He said the tree symbolized the residents’ resiliency in the face of adversity.

“It was just a tree but it now stands for the people’s hope and ability to move on. I think they have moved on and have accepted what happened before,” the councilor said.

Before the tragic flood which swept away Alfonso’s home, pet goats and neighbors, the tree served simply as a cool shade in summer.

Both Alfonso and her partner recalled that the tree was there when they first moved to the area 17 years ago.

“When I was in Grade 3, that tree was already there. No one knows who planted it and when,” Dela Cruz said, estimating it to be at least 50 years old.

In summer, the tree would shed dry leaves which fell into their backyard.

At one point, Alfonso recalled that the family tried to burn the tree to drive away the evil spirts it was supposedly sheltering.

“But it never died. And even if it was a nuisance for dumping dried leaves in our backyard, we are grateful to it for saving our lives,” she said in Filipino.

No longer a nuisance

One of Alfonso’s neighbors who used to complain about having to sweep the trees’ dried leaves was one of the first to be “saved” by the tree.

“I told that neighbor, ‘You’re the one who was always ranting about the tree but now you owe your life to it!’” Alfonso chuckled.

The tree still stands tall two years after the tragedy, its leaves and flowers in full bloom. But every time rain falls hard on their patched roof, Alfonso finds it hard to sleep as she is haunted by Ondoy’s wrath.

“It was an unforgettable day. I could barely doze off whenever I am reminded of those floods and the lives lost,” she said.

Amazingly, all of the people in seven families who clung to the tree—including a 2-month-old baby—were saved.

Most of these families were later relocated by the city government to Bulacan to keep them away from danger zones, such as a nearby creek. But Alfonso chose to remain in the area.

The couple had constructed a fence around their backyard again. The tree juts out amid the dreary landscape of shanties and smaller trees.

“This tree may be just a tree, but it is our hero,” Alfonso said. With a report from Kate Pedroso, Inquirer Research