Promotion awaits MMDA man selling ‘kakanin’ on the side 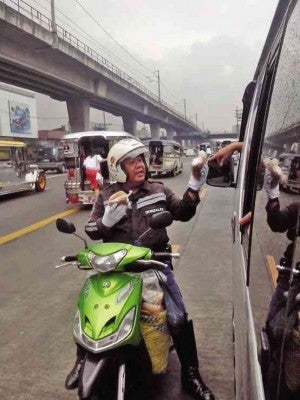 MANILA, Philippines–A Metropolitan Manila Development Authority (MMDA) traffic constable who ended up on social media sites after he was spotted selling “kakanin” (native delicacies) to motorists was cited by the agency on Monday for his honesty and “creativity.”

MMDA Chairman Francis Tolentino met with 51-year-old Fernando Gonzales at the agency’s headquarters in Guadalupe, Makati City, where he was commended for finding an honorable way to raise money for his sons’ education instead of asking for bribes.

Tolentino, who described Gonzales as a good example for other traffic enforcers, advised him to continue what he was doing, adding that he had endorsed him for a promotion.

But not before he made sure that the traffic constable’s side job was not interfering with his primary duties and responsibilities.

“I am selling kakanin during weekends only since these are my days off,” Gonzales told Tolentino.

He explained, however, that he made the decision to wear his MMDA uniform to encourage more people to buy from him.

Gonzales became an instant hit on YouTube, Facebook and Twitter when photos and videos of him selling native delicacies to motorists on Edsa and in Caloocan City were shared by netizens who lauded his “amusing and honorable” way of striving to earn extra money for his family.

Gonzales was trembling and seemed to be in shock when he showed up at the MMDA headquarters on Monday because he initially thought he would be getting a reprimand from Tolentino.

He told reporters that he has been a traffic aide and member of the MMDA Motorcycle Unit since September 1990. He earns P15,000 a month.

“I thought of selling tupig, puto and other delicacies prepared by my wife to help send my two sons to school,” he said.

Asked if he ever thought of asking bribes from motorists, Gonzales said that he feared losing his job and his children’s trust.

MMDA traffic aide with a heart of gold has one wish: To become a regular employee