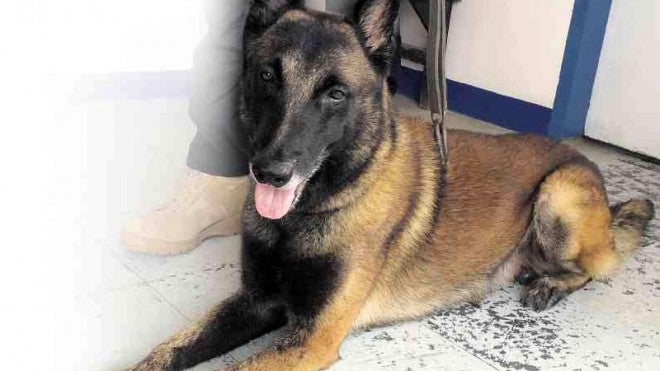 A QUIET HERO Meet Zamboanga City’s new hero, Diego, a Belgian Malinois dog, with a new handler while waiting for his original handler, PO2 Manuel Franklin Ined, to recover from injuries sustained from a blast inside a massage parlor. JULIE S. ALIPALA/INQUIRER MINDANAO

ZAMBOANGA CITY, Philippines—Whoever left the homemade bomb at the massage parlor didn’t count on Diego being there.

A 3-year-old Belgian Malinois dog, Diego quickly detected the presence of the explosive at the massage clinic in Zamboanga City on Sunday night, alerting its handler.

But the two will survive and were commended by Mayor Maria Isabelle Salazar at a news conference Monday “for their acts of heroism.”

Thanks to the dog

There were no other casualties in the explosion, which occurred 10 minutes after another blast ripped through a videoke bar above the massage parlor, injuring no one, police said.

“If not for Diego’s early detection of the bomb, (other members of the) bomb squad would have been (injured),” Senior Insp. Ryean Lhoyd Bato, chief of the Zamboanga City Police Bomb Squad Unit, told the Inquirer.

Bato’s team at first responded to the blast inside the videoke bar on Tomas Claudio Street.

While in the area, Diego became suspicious of a cardboard box in the massage parlor. Ined was about to check “when the device went off,” Bato said.

The blast felled Ined with injuries on his face. Diego was able to run for about half a kilometer away from the blast scene.

Ined was taken to Brent hospital, near the blast site.

Poor Diego, who appeared to be lost, was found walking near Zamboanga East Central School, about 500 meters from the blast site.

Bato said Diego seemed to be on its way home to Camp Batalla, 200 meters from the school.

“But he will remain under observation by the assistant handler. We will run an examination tomorrow,” Arriola said.

Diego’s ears could have also suffered from the blast as the dog’s new handlers had to shout its name to get its attention.

Bato said Diego would be allowed to rest for about three weeks. “We hope he can recover soon,” he said.

Salazar also announced a P50,000 reward for anyone with information leading to the arrest of the people who planted the bombs.

Senior Supt. Angelito Casimiro, the city police chief, said it was too early to blame the attack on the terrorist group Abu Sayyaf.

“There are many motives to look at. It could be a diversionary action (from the military operation against the Abu Sayyaf in Basilan and Sulu). It could also be extortion,” Casimiro said.

Security officials said the bomb was made from ammonium nitrate and possibly set off with a mobile phone.

In Manila, Defense Secretary Voltaire Gazmin also said the twin bombings could be a “diversionary tactic” of the Abu Sayyaf to mislead the military.

“That is always the case. Whenever there are operations, they create disturbances to ease the pressure in their area,” Gazmin said.

The Armed Forces of the Philippines has said at least 16 Abu Sayyaf camps have been overrun by troops since the start of their operations last month in Sulu and Basilan provinces.

AFP Chief of Staff Gen. Gregorio Pio Catapang Jr. said the military would check the forensics of the bombs.

Catapang said he would go back to Zamboanga to check on the situation, saying he was not satisfied with the security arrangements there.

Catapang appealed to Zamboanga City residents to cooperate with the military in identifying possible troublemakers.

He said he had suggested to the local officials of Basilan to hold a peace and development economic summit to deal with the causes of instability there.

Zamboanga has been the scene of Muslim rebel activity in the past.