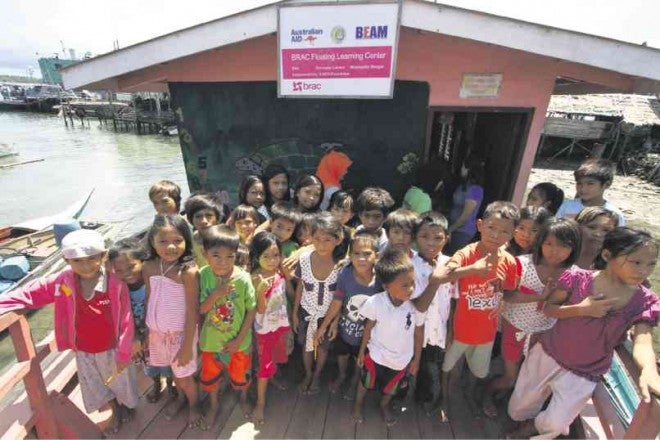 A PINK floating school moored at a community of houses on stilts in Bongao town, Tawi-Tawi province, stands as a beacon of hope for Badjao children, who have little access to education in the country.

BONGAO, Tawi-Tawi—By learning how to count, Arabella Giya, 8, and her brother Adrian, 7, now know how to price their fish catch.

“My kids are learning not only words and numbers but also how to do business like selling fish. They know how many fish is equivalent to a certain price,” Panaglasa Sahiduan Giya said.

Arabella and Adrian are among 30 pupils of a school boat operated by the Bangladesh Rural Advancement Committee (BRAC) Floating Learning Center in Barangay (village) Lamion here.

Panaglasa Sahiduan, a Badjao, said her children usually got shortchanged when they sold fresh catch in the neighborhood and at the public market.

Herman Melhan used to be a shy 8-year-old Badjao boy. Six months after enrolling at the school, he can now recite, dance and even teach fellow children about numbers.

“I know now how to draw, read and count,” he proudly told the Inquirer.

Jennilyn Jumdani, the school teacher, acknowledged that her students were being discriminated by other tribes. “Many of the Badjao are … bullied, that is why many of them are afraid to enroll in regular schools or to venture outside their communities,” she said.

They, too, have rights, she added.

The BRAC Floating Learning Center was established in June with the help of Australian aid through Basic Education Assistance for Mindanao (BEAM) and the Autonomous Region in Muslim Mindanao’s Department of Education (DepEd).

The ARMM, the DepEd and BRAC Philippines delivered a fleet of seven floating schools, hoping that this would help address the education gap in the region. These were brought to seven villages in Basilan, Sulu and Tawi-Tawi provinces, and would cater to the needs of at least 200 Badjao and Sama children this school year.

Jumdani’s classroom is a pink vessel moored at the small Badjao community in Lamion.

The model is more suited for the culture of the Badjao and Sama people, who are “mostly reluctant to mingle with people belonging to other, more dominant Moro tribes,” he said.

Jumdani said teachers in the floating schools had to handle multigrade pupils.

She has one appeal to the parents—spare her pupils from fishing.

“Fishing is a family affair for the Badjao. Everyone contributes. They have respective roles like preparing nets, ensuring the fishing boats are in good condition, food, fishing and selling, and kids are the ones tapped to peddle their catch. These affect their class attendance,” she said.

Still, Jumdani said she was happy to hear stories of empowerment on how her little wards were able to raise the sales of their fish catch “because they know now how to count.” Julie S. Alipala and Karlos Manlupig, Inquirer Mindanao